A crowd of 33,430 fans packed the Carrier Dome in Syracuse, NY Saturday to witness the No. 2-ranked Orange down the Connecticut Huskies, 85-67, in a Big East Conference men's basketball game. However, a lot of fans, especially the students, weren't just there to watch Syracuse earn its 20th consecutive home victory, but instead were there to try and convince five-star recruit Nerlens Noel, the top recruit for the Class of 2012 according to ESPN Recruiting services, to commit to SU.

The Dome was buzzing, as the student's sections created signs and wore fake flat-top haircuts -- the hairstyle that Noel sports -- to try and sway the star recruit, who was making his unofficial visit. 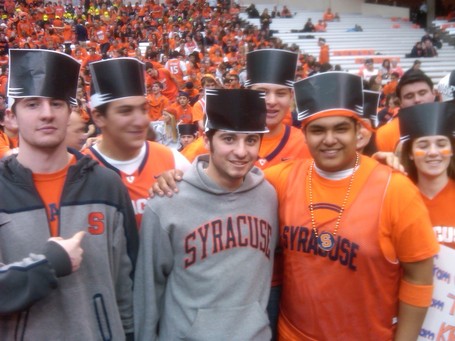 During the national anthem, the traditional shouting of "O!" during the lyrics, "O! say can you see..." was by far the loudest of the season (of course, maybe, 33,000-plus had something to do with that), as the crowd made it apparent they'd love to see the 6-foot-10, 200-pound center from The Tilton School (Tilton, NH) in an orange uniform next fall.

After Syracuse's victory, Noel was inside the Syracuse locker room hanging out with assistant coach Mike Hopkins. Along side Noel, was high school teammate Goodluck Okonoboh who is a Class of '13 recruit.

On Sunday morning, Noel was asked via Twitter how his visit to Syracuse went:

Noel wasn't the only SU recruit in attendance Saturday, as verbal commit DaJuan Coleman, a five-start center who was just named to the McDonald's All-American game, March 28, and Class of '13 recruit, point guard Tyler Ennis, were there too.