Syracuse Orange sophomore center Baye Moussa Keita looks like he is going to give it a try Saturday afternoon, as the No. 1-ranked Orange (16-0, 3-0 Big East) host No. 20 Marquette Golden Eagles in a Big East Conference game. Keita was listed as a game-time decision by SU head coach Jim Boeheim Thursday after the second-string center suffered a freak injury to his hip in practice before Wednesday's victory at the Providence Friars. Keita had trouble jumping and did not play against the Friars, but he did practice fully Friday. 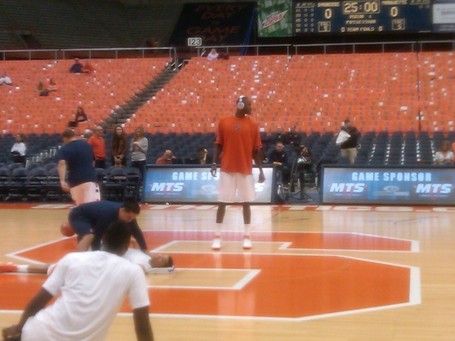 So far, Keita is jogging around and taking part in pregame warm ups, but he is lacking a bit of a hop in his step. He is however doing pre-game drills with ease and throwing down dunks. Look for Keita to play sparingly and for freshman forward Rakeem Christmas to play a bunch of minutes.

Another key for Syracuse Saturday, will be sophomore center Fab Melo staying out of foul trouble. If Melo can do that and play up to his steady clip (7.4 points per game, 5.3 rebounds per game and 3.1 blocker per game) the Orange should be just fine.

On Saturday, SB Nation New York will be blogging live from press row at the Carrier Dome for the Syracuse vs. Marquette Big East showdown. Be sure to check back to this StoryStream for in-game and post-game updates.

For more on the Orange, visit the SB Nation blog Troy Nunes Is An Absolute Magician, while Anonymous Eagle as everything on Marquette. Make sure to follow along on Twitter at SBNationNY or JaredSmithCNY.