The Big East tournament semifinals yielding one upset with Syracuse topping the top seeded Georgetown in overtime. Notre Dame couldn't repeat the magic against Louisville, falling to a record-tying performance by Peyton Siva.

After uprooting Georgetown, the number one seed in the Big East tournament, Syracuse will look to finish its time in the disintegrating Big East with a conference championship. Standing in its way is Louisville, who smashed Notre Dame in a double-digit win to move on.

The classic Big East rivalry between Syracuse and Georgetown provided yet another thriller as the Orange prevailed in overtime, 58-55.

Syracuse dominated most of the game, leading 29-20 at halftime, but allowed a frantic Georgetown comeback in the final minutes sent the game to overtime. However, the Hoyas fell 7-4 in the bonus period.

Louisville's backcourt of Russ Smith and Peyton Siva was too much for Notre Dame to handle in a 69-57 bruising that never got out of hand.

Smith led the Cardinals in scoring with 20 and added six assists, while Siva scored 12 and notched seven steals, tying a tournament record. 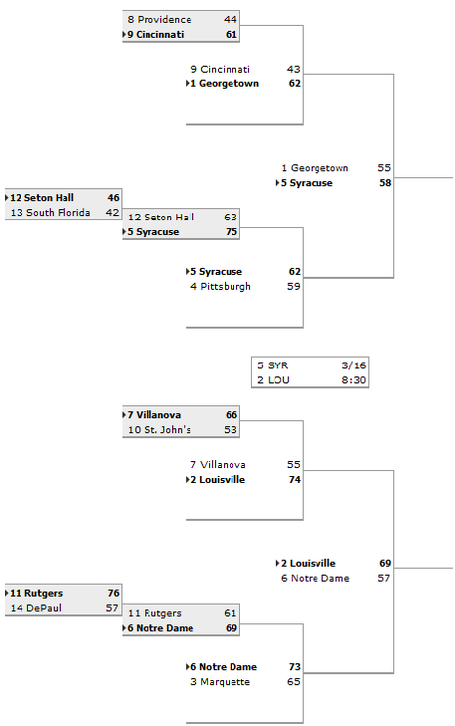