Over the summer, SB Nation New York's Jared Smith visited the aircraft carrier museum, U.S.S. Midway, which will host the Syracuse Orange and San Diego State Aztecs Friday in the "Battle on the Midway."

The Syracuse Orange will begin the 2012-13 men's basketball season Friday when it faces the San Diego St. Aztecs in a non-conference game on the deck of the aircraft carrier museum, U.S.S. Midway, located in San Diego, CA.

The military-themed showdown will place the two nationally-ranked programs -- the Orange are 9th in the country while the Aztecs are 20th -- in an unusual circumstance as both will be play outdoors on a court built on the flight deck of the retired vessel.

This scenario was played out last season when the Michigan St. Spartans and North Carolina Tar Heels opened their seasons against each other on the deck of the U.S.S. Carl Vinson, the ship that was used to bury Osama bin Laden at sea.

UNC head coach Roy Williams said the experience was something he will never forgot.

"Other than the Final Four, winning the national championships, I enjoyed that experience more than any game I’ve ever been involved in," Williams said. "There were some logistical things, there were some things that went on that were frustrating. But the game was so huge, and the feeling you got from the military people was so big, that it made all these other things seem so small ... compared to the love that I had for being there in front of our military, talking to our guys and girls, and the feel that I had."

As a person who visited the U.S.S. Midway in June, I can confidently say after Friday's contest Syracuse head coach Jim Boeheim, who will begin his 37th campaign at SU, will say the same about this season's first game, which is being called the "Battle on the Midway."

The U.S.S. Midway is a massive naval ship that's now docked permanently within walking distance of downtown San Diego and its famous Gaslamp district, which arguably has the best bar scene on the West Coast -- my wife and I took a two-week trip around the state of California and we regret not spending more time here.

From the deck of the ship (pictured below) San Diego's skyscrapers can easily be seen, and its almost a certainty this backdrop will be featured frequently during Fox Sports Net's broadcast. 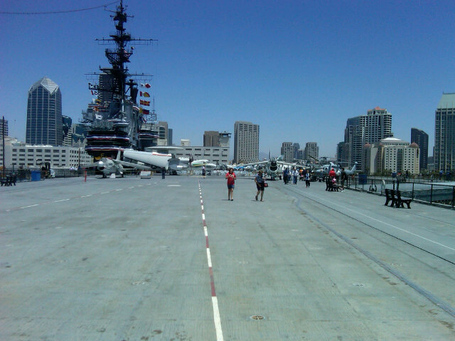 Though playing on the deck of a aircraft carrier has it benefits, it also has downsides.

As of Monday, the National Weather Service is forecasting "showers" for Friday night with an increasing degree of confidence. If the chances for rain increase, the game may need to be moved inside to the Valley View Casino Center. That decision will need to be made Tuesday or Wednesday, reports the San Diego Union-Tribune.

Another aspect that will affect the event is wind.

In most scenarios, outdoor basketball games are held on courts protected by buildings. The U.S.S. Midway is docked in a port, however, and is very susceptible to wind.

Now, gusts of wind happen more towards the bow of the ship than towards the middle of it (hang onto something if you get out there), where the court is planned to be built (pictures below). However, no matter where you go on the deck it is breezy, and it will affect any 3-point shots.

(Note: the Aztec's best player Jamaal Franklin averaged almost five 3-point attempts per game last season, more than any player that will be playing on Friday. However, Syracuse attempted a total of 668 3-pointers while San Diego had 578.) 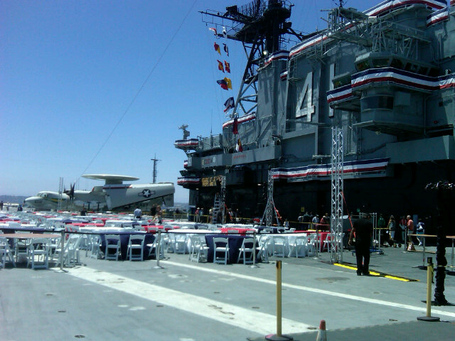 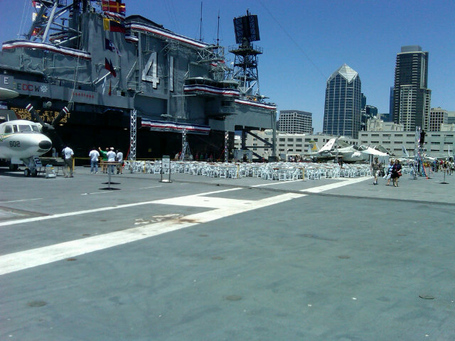 All-in-all, if you're a Syracuse or San Diego State basketball fan paying the $150-500 to watch this spectacle live, it will be an amazing experience.

Beforehand, make sure you take the time to get there early to tour the ship, have fish tacos someplace (we had them at Tin Fish in the Gaslamp and they were awesome), check out all the huge boats in the marina and enjoy the beautiful weather that San Diego provides, because we all know you've dying to see some sunshine.

Syracuse vs. San Diego State: All you need to know about Orange's season opener