Eric LeGrand On Sports Illustrated Cover For 'Moment Of The Year'

Share All sharing options for: Eric LeGrand On Sports Illustrated Cover For 'Moment Of The Year'

Former Rutgers defensive lineman Eric LeGrand will be on the cover of Sports Illustrated for the magazine's "Moment of the Year," it was announced on Tuesday.

LeGrand, who suffered a severe spinal cord injury after a collision against Army last Oct. 16, led his former teammates out of the tunnel prior to an Oct. 29 game against West Virginia. It was his first time returning to the field since the injury.

Sports Illustrated cover and more after the jump. 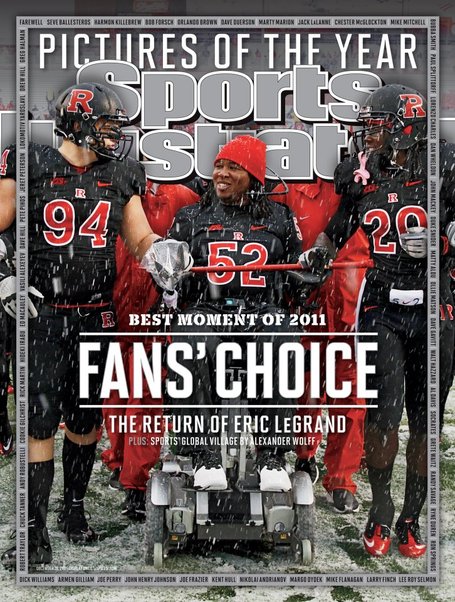 LeGrand recently told the Newark Star-Ledger that he is regaining functionality and that rehabilitation is going well.

"I'm doing very well," he said tonight at a Bart Scott charity event in Jersey City where he served as the guest of honor. "I actually sat up for 35 seconds today with somebody holding my pelvis, I just came from therapy and just got off the treadmill and everything so I'm doing very well with that whole thing, I'm very excited."

For more Rutgers football coverage, visit our team page or our blog, On the Banks.