Senior defensive tackle Eric LeGrand, who was paralyzed from the neck down a year ago in a game against Navy, but wanted to lead his team onto the field before Rutgers Big East match-up against 25th-ranked West Virginia.

As you can imagine it was a sight to behold as LeGrand led his team out onto the snowy field in Piscataway, N.J. at High Point Solutions Stadium – home of the Rutgers football team.

Below is a picture of scene as LeGrand led his team onto the field via @fordhamrams85. 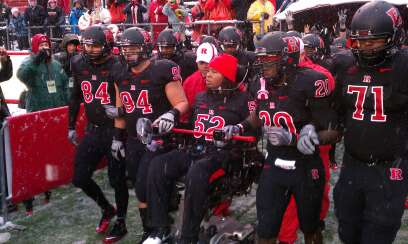 According to Jason Romano the crowd was chanting "52, 52" – LeGrand's jersey number.

Awesome moment at the Rutgers game with Eric LeGrand leading the boys out on the field. Crowd chanting "52, 52"

And here's a video of the moment via College Gameday.