Libyan leader Moammar Khadafy was killed on Thursday – reportedly by a man wearing a Yankees cap (pictured below). 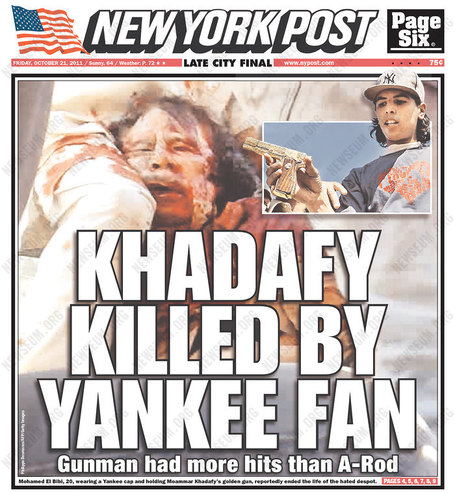 Leave it to the New York Post to come up with the headline 'Gunman had more hits than A-Rod' on page six of Friday's paper.

A-Rod's post-season flops have long been the but of many jokes for New York newspapers, and I assume this headline is poking at A-Rod's most recent post-season performance, where he went 2-18 during the Yankees five-game series loss to the Detroit Tigers.

Rodriguez temporarily silenced the post-season critics with his 2009 performance when he batted .365 with a .500 on-base percentage, belted six home runs and had 18 runs batted in during the Yankees championship run.

However; one great post-season performance in '09 obviously wasn't enough to stop New York newspapers from poking fun of A-Rod's post-season failures, because apparently Khadafy's gunman had more hits than him.