Would Brian Cashman Leave The Yankees To Join The Boston Red Sox?

Share All sharing options for: Would Brian Cashman Leave The Yankees To Join The Boston Red Sox? 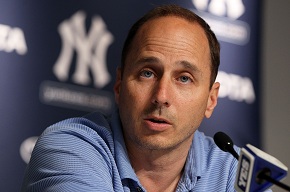 With Theo Epstein bolting Boston for a new gig as general manager of the Chicago Cubs, would New York Yankees general manager Brian Cashman cross enemy lines to replace Epstein in Beantown. Cashman says no, but it is a logical question to ask.

Cashman was asked about that new job opening in Boston today, and said simply "I have a job."

Ah, but there is the rub. Cashman, technically, won't have a job much longer. His contract as Yankees' general manager expires at the end of the month. Cashman had said he would like to return, and Hal Steinbrenner has said he would like the GM to stay. Nothing is official, though, so the door is open for Cashman to explore his options.

To be honest, could anyone blame Cashman if he decided to leave the New York pressure-cooker behind and see if he could build a winning team elsewhere, without the expectations that come with being in New York. And without the Yankees' unlimited budget, of course.

But going to Boston? That really doesn't seem to make sense. Why would he leave one high-pressure, high expectations job in a city with a vicious media and a fan base that considers anything less than a title a failure to go to another city where the situation is almost exactly the same?

If the timing had been different I could have seen Cashman throwing his hat in the ring for the Cubs' job. I could see him looking for a move to a smaller-market team where his penchant for excellent small moves and his desire to develop and utilize young talent would not be stifled by the mandate of having to chase a World Series title every season. Why wouldn't Cashman, Yankee GM since 1998 and a Yankee employee since 1986, be tempted by an opportunity to see if he can build a team into a winner without the Steinbrenner fortune?

I just can't see him jumping to the other side in sport's biggest rivalry.