Thierry Henry was commemorated with a bronze statue by his old club, Arsenal, on Dec. 9.

The statue depicts Henry during his sliding celebration after scoring against rival Tottenham Hotspur in 2002. The team also made statues for former manager Herbert Chapman and defender Tony Adams as part of an Arsenal 125th anniversary celebration scheduled for Dec. 10.

Henry was moved to tears when he spoke at the unveiling ceremony.

"I know I don't show emotions often," he said after a pause. "Some of the time some of the press used to kill me for not showing emotion. But there you go I'm showing emotion right now for the club I love." (via MLS Soccer.com) 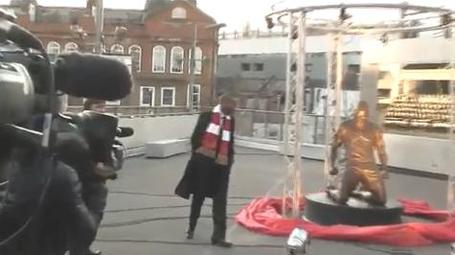 For more coverage of the Red Bulls see our team page or our blog Once A Metro.