Share All sharing options for: Rick Nash Trade Reactions: Rangers Get A Steal In Blockbuster Deal

Now that the deal between the New York Rangers and Columbus Blue Jackets is finalized, and All-Star forward Rick Nash will be a part of the Blueshirts next season, fans and experts are weighing in on the deal. Here's a bit about what they're saying. First up, the SB Nation blog Blueshirt Banter.

That's an absolutely steal on Glen Sather's part. Sather played the waiting game, and it absolutely paid off in the end. The fact that Sather was able to complete a deal without including Stepan, McDonagh, or Kreider, is easily a win-win for the Rangers. The top-six for the Rangers looks pretty lethal with Rick Nash being added to the likes of Brad Richards, Marian Gaborik, Chris Kreider, Derek Stepan, and Ryan Callahan/Carl Hagelin.

The Blue Jackets' SB Nation blog, The Cannon, is not liking pieces of the deal:

I have a very hard time accepting Erixon as a piece of the deal. His pouting in Calgary gives me serious pause when it comes to how loyal he'll be to the Jackets. Dubinsky should fit in well, while Anisimov adds some size and skill up the middle. He will likely team with Derick Brassard as the team's top-six centermen.

At ProHockeyTalk.com, Mike Halford did a rundown of the immediate Twitter reactions with most favoring the Rangers in this deal.

According to CapGeek.com, the trade when it comes to money works out to be an even swap.

Meanwhile, EA Sports' NHL 2013 has already placed Nash in a Rangers jersey. Here's what he's going to look like. 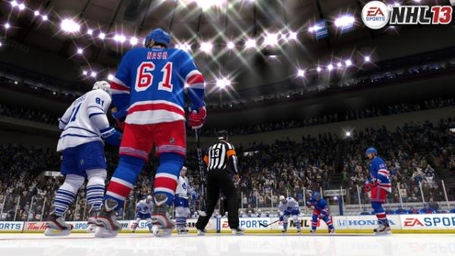 For the latest on the Rick Nash trade, check back to this SB Nation New York StoryStream. To discuss the trade, visit the SB Nation blog Blueshirt Banter.

Rick Nash: Newest Ranger Says 'This Is Going To Be Fun'