The New York Rangers unveiled their special Winter Classic jerseys Monday afternoon on their UStream account live from Central Park in New York City. The 2012 Winter Classic is scheduled for 1 p.m. on Jan 2. in Philadelphia. The Winter Classic is an outdoor hockey event which has been played by NHL teams since 2008.

Rangers captain Ryan Callahan as well as Brandon Dubinsky, Henrik Lundqvist and Dan Girardi appeared to model the jerseys during the reveal today. During the reveal, Lundqvist announced that he will also don a goaltender's helmet that will be specially made just for the Winter Classic. Pictures of the Rangers' jersey after the jump.

Without further ado, here is the jersey the Rangers will wear on Jan. 2 against the Flyers: 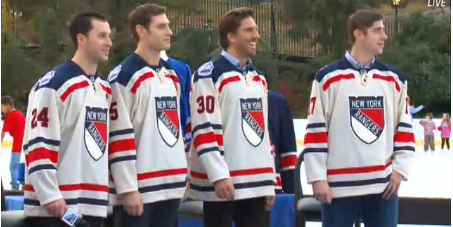