The man who tried to celebrate on the field with the New York Mets after Johan Santana's no-hitter has been given a life-time ban from Citi Field, he told the New York Post on Monday.

Rafael Diaz, 32, was charged with trespassing and spent two nights in jail after charging the field to join the Mets' celebration after Santana completed the organization's first no-hitter list week. But Diaz said there was nothing wrong with his intentions.

"I was overcome with emotion, just being a die-hard Mets fan," Diaz told The Post after his release from jail yesterday. "That's all it was."

"I couldn't help myself," Diaz said. "I just wanted to be on the mound celebrating the no-hitter."

Diaz made his way all the way to the mound after jumping onto the field in the moments after the no-hitter. But shortly after joining the team's joyous huddle around Santana, Diaz was tackled by two security guards and taken into custody.

And if two nights in jail weren't bad enough punishment, he was caught on television while wearing jean shorts. 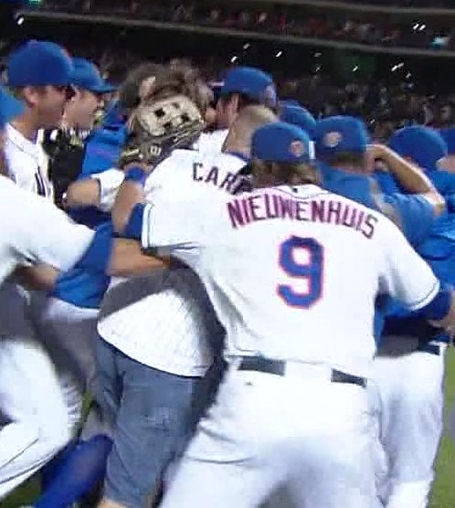