Share All sharing options for: John Calipari To The New York Knicks?: Let The Rumors Begin!

Well, that didn't take long. The Kentucky Wildcats have not even been 2012 NCAA Men's Basketball Tournament champions for 48 hours, and already the John Calipari as head coach of the New York Knicks speculation has begun.

Adrian Wojnarowski of Yahoo! Sports, one of the most respected NBA writers in the business, wrote Tuesday that "Calipari wants the next big, shiny thing - wants the biggest paycheck - and that's the Knicks now." 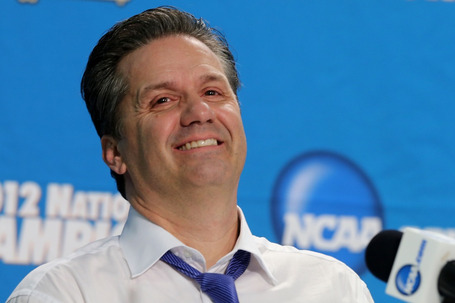 Head coach John Calipari of the Kentucky Wildcats smiles during the post game news
conference after the Wildcats 67-59 victory against the Kansas Jayhawks in the
National Championship Game of the 2012 NCAA Division I Men's Basketball Tournament
at the Mercedes-Benz Superdome on April 2, 2012 in New Orleans, Louisiana.
(Photo by Jeff Gross/Getty Images)

Should this come as a surprise? Of course not. As Wojnarowski also wrote:

"... a desire to return to the NBA has never left. He has his NCAA championship now, and the New York Knicks have three necessities that Calipari desperately needs: a vacancy, a big stage and a blank check."

Calipari had two seasons and part of a third in late '90s with the New Jersey Nets, a tenure that ended when he was fired during the 1998-99 season with the Nets at 3-17.

He could stay at Kentucky as long as he wants at this point, or at least until allegations of NCAA recruiting violations surface. It isn't fair, but somewhere along the line it is inevitable that they will. Just like it's inevitable that Calipari's wanderlust will lead him out of Kentucky sooner rather than later.

It is probably also unfair to speculate about a replacement for interim Knicks coach Mike Woodson when the former Atlanta Hawks head coach has done a good job since taking over for Mike D'Antoni. The Knicks are in position to make the playoffs right now, though Tuesday's awful loss to the Indiana Pacers was a reminder of just how fragile the Knicks are right now without Jeremy Lin, Amare Stoudemire and Jared Jeffries.

Woodson probably has to not only get to the playoffs, but have the Knicks win a series or two in order to stave off the ascension of Calipari, Phil Jackson or some other big-name coach to the job.

Is Calipari to the Knicks a good idea? For Calipari's wallet, sure. For bloggers and social media, definitely. For the Knicks? Probably not. Calipari and James Dolan would be a combustible combination. Plus, Calipari is used to the attention and the show being about him -- and that isn't how the NBA works. It's about the players -- just ask D'Antoni.

The speculation, though, is likely just beginning. Let's see where it leads.