It's official, the New York Knicks are taking their talents to South Beach for the opening round of their second straight trip to the postseason. As you can see below, prices for the games at The Garden are significantly higher than the four games in Miami. At an average ticket price of $779 per seat, the games at The Garden are 85 percent more than the games in Miami and are by far the most expensive of any first round games. It would seem that Knicks fans have visions of '99 dancing through their heads and with good reason because the parallels are unavoidable.

If you'd like to be at The Garden to (hopefully) relive the magic of that improbable run, click here. 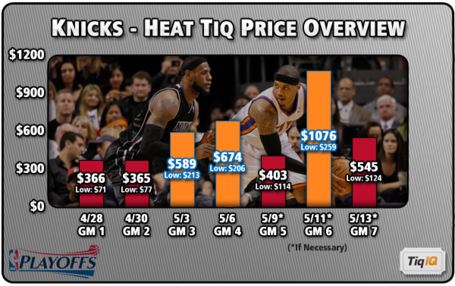