Jeremy Lin On The Cover Of Sports Illustrated

Share All sharing options for: Jeremy Lin On The Cover Of Sports Illustrated

New York Knicks phenom point guard Jeremy Lin has captured the nation's attention with his "out of nowhere" story that has featured leading the Knicks to four straight victories. The amazing run, which has showcased Lin averaging 27.3 points and 8.3 assists per game, helped him earn the Eastern Conference Player of the Week award Monday, and now an even bigger honor Tuesday, as his mug will be on the latest cover of Sports Illustrated.

The picture of Jeremy Lin's SI cover can be seen after the jump... 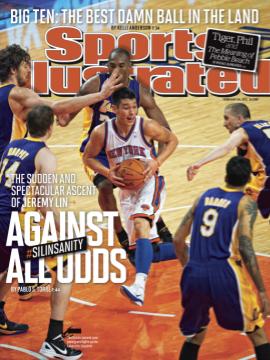 Linsanity has spread throughout the nation including being all over the local sports scene, as it's tough to go anywhere without somebody talking about Lin's and the Knicks' success.

So, congrats to Lin for making the cover.

For more on Jeremy Lin and the Knicks, check out the latest in this SB Nation New York StoryStream. For more Knicks coverage, visit our team page or our blog Posting and Toasting.