Tim Tebow is a really nice guy. He has a well-documented track record of making friends with practically everyone he meets. Unfortunately, on Sunday he had to meet thousands of New Yorkers at the same in Yankee Stadium. That's a tough crowd to impress, even for perhaps the nicest guy in football. According to the Associated Press, fans weren't shouting "te-BOWWWWW" from the bleachers.

But the day wasn't a total failure! Tebow happened to meet one Dwyane Wade, a talented sportsman in his own right, and the two apparently hit it off. We think. Tebow and Wade were caught on camera watching the Yankees take on the Angels, and just seemed kind of ... bored. If they didn't happen to portray two megastars, the following screen caps would be some of the least interesting to ever grace the Internet. I know you are going to click the jump, just know that you are going to be very disappointed. 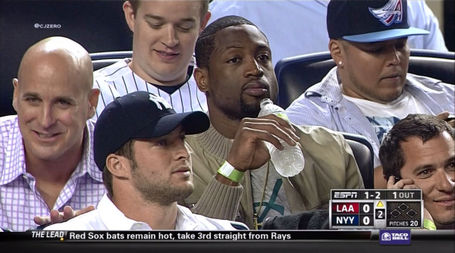 Told you. Really boring. But hold on! Wade moved down a row to sit next to Tebow. Will we see sparks fly? 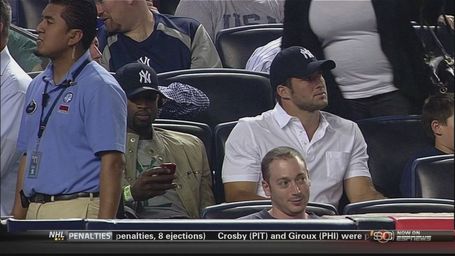 For more on Tebow and the New York Jets, head over to the SB Nation blog Gang Green Nation. For more on the Yankees, check out Pinstripe Alley.