Share All sharing options for: Plaxico Burress 'Shot?' Too Soon To Tell

Plaxico Burress "may be shot." Burress "looks slow" and "doesn't get the separation he used to get from cornerbacks." The 34-year-old former New York Giant was a "bad signing" by the New York Jets.

All of these daggers came this morning from the poison pen of Ernie Palladino, long-time New York scribe and former Giants beat reporter.

Are Ernie's arrows justified? Burress has just 14 catches for 237 yards and two touchdowns in six games, and only 10 catches since grabbing four passes in the season-opening victory over Dallas. 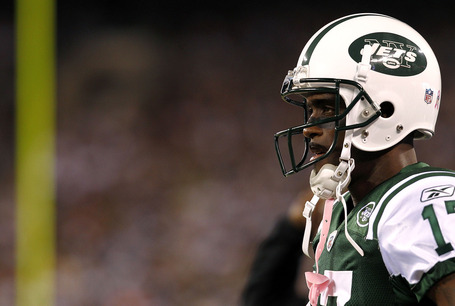 I have been warning excitable fans who remember the dominant force Burress was in his pre-prison days with the Giants and the Pittsburgh Steelers not to expect too much from Burress. After more than two seasons away from the game, more than a year in prison, and at an age where receivers have historically begun to decline expecting Burress to simply step on the field and start catching six or seven passes per game from Mark Sanchez right away was just silly talk.

Tara Sullivan of the Bergen Record put it this way when it comes to realistic expectations about what Burress can, and cannot, do at this stage of his career:

There were plenty of questions of how much football Plaxico Burress had left after two years out of the game and 14 months behind bars. There was more than enough justifiable skepticism at whether the rangy, athletic wide receiver still had any of the speed and leaping ability that once elevated him from the rest of the NFL’s wide receiver talent pool.

But they are enough for concern.

Ernie P. might be right that Burress is "shot." Nice pun, by the way, Ernie! For now, though, I think Sullivan's more tempered commentary is probably more on the mark. Not as much fun to read as Ernie's, but more accurate for the time being.

Burress, to his credit, is saying the right things. He has not gone off on Sanchez, or criticized the play-calling of offensive coordinator Brian Schottenheimer. He is just expressing the belief that his time will come.

"I'm just going to keep working," Burress said. "I know what I can do in this league, I've done it before, there's just some work ahead of me."

We will just have to wait and see if Burress is right, or if he really is "shot." Thing is, though, I think his early-season struggles thus far were entirely too predictable. The real surprise, to me, is why anyone would be surprised with the way he has played thus far.