Call them the 'Sal Alosi Guidelines.' In light of last Sunday's sideline incident involving the Jets strength and conditioning coach and Miami's Nolan Carroll the league has issued a reminder to all teams about sideline restrictions.

Teams were reminded that:

The NFL also released the applicable sections from its Policy Manual, which states:

Team personnel in the bench area must observe the zone restrictions in the three areas - (1) the first border or white stripe; (2) the second border; and (3) the player area. Violations of the zone restrictions are subject to fine at the discretion of the Commissioner and game officials have been directed to call unsportsmanlike conduct penalties when warnings to clear the first border areas are not heeded. Safety and officiating access are the prime consideration...

First Border - The only persons allowed in this solid white six-foot (minimum) area on a continuous basis during the game are the Game Officials and the chain crew; no coaches or players.

Second Border - ... [extends to solid yellow line within the bench area that is six feet from the solid white border.] Within the bench area, the only persons allowed within this second border on a continuous basis during the game are the head coach, assistant coaches involved in calling signals, assistant coaches in charge of substitutions, and small groups of situation substitution players ready to be sent into the game immediately. No other players are allowed in the second border. Each coaching staff should designate a "get-back" coach to ensure that the rules governing the borders are observed by all players and coaches during the game.

Players & Bench Personnel - Except for those persons allowed in the first and second borders, all other persons with bench credentials and all players not in the game at the time shall remain in the bench area behind the second border.

While play is in progress, there will be no coaches or players within the white border, thus avoiding possible interference with officiating of the game. In the six-foot area between the back of the white border and the solid yellow line, only the following persons will be permitted: the Head Coach, Assistant Coaches involved in calling defensive or offensive signals, Assistant Coaches in charge of substitutions, and only those small groups of players ready to be sent into the game immediately (offensive or defensive packages).

The game officials will issue warnings during the game regarding first and second border violations and work with the team's "get-back" coach to prevent problems, and will call unsportsmanlike conduct penalties in cases of flagrant violations after two warnings...The League office may impose discipline on clubs for a first violation of the border rules, followed by increasing fines for subsequent violations.

Coaches and other non-participating team personnel (including uniformed players not in the game at the time) are prohibited from moving laterally along the sidelines any further than the points that are 18 yards from the middle of the bench area (i.e., 32-yard lines to left and right of bench areas when benches are placed on opposite sides of the field). Lateral movement within the bench area must be behind the slid six foot white border."

To assist with the enforcement of this rule, effective immediately, all game officials are being instructed not to engage in any prolonged discussion with any coach outside of the permitted zone while play is in progress.

This rule is intended for safety and to avoid possible interference with officiating of the game. 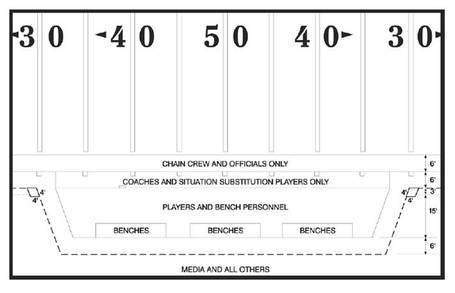