Stuck inside due to Hurricane Sandy and with the NFL Trade Deadline approaching -- pushed back to Thursday because of the storm -- I decided to take a look at the New York Jets and their trade history. In my opinion, the best and worst trades the Jets ever made resulted in Gang Green acquiring a quarterback - Joe Namath and Tim Tebow.

On Nov. 29, 1964, the Jets traded the rights to quarterback Jerry Rhome to Houston for a first-round draft pick. The Jets used that pick to take Alabama's Namath. After 52 years of existence, a trade that happened nearly 48 years ago is the best one the team has ever made.

In his 12 years with the Jets, Namath won the Rookie of the Year award in 1965 and, most famously, led the team to its only Super Bowl appearance and championship, the famous guaranteed win over the heavily favored Baltimore Colts in Super Bowl III on Jan. 12, 1969. "Broadway Joe" as he was called for all his flash and flare and media saavy, was the MVP in the shocking 16-7 Jets victory, throwing for 206 yards in the upset. 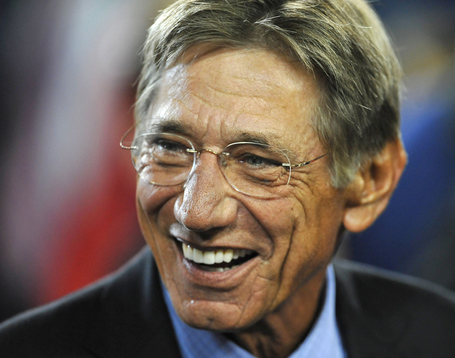 Namath did not have stereotypical Hall of Fame numbers -- he threw 173 touchdowns and 220 interceptions in his 140 career games with the Jets and Rams (four games in 1977). He threw for 27,663 yards, made the Pro Bowl five times and was an All-Pro in 1968, but he changed the way the quarterback position was played, becoming the first quarterback to throw for 4,000 yards (1967) and for that, along with his Super Bowl guarantee, Namath is in the Hall of Fame and widely considered the greatest Jet of all time.

The worst trade the Jets ever made happened in March, the trade for Tebow. And while the Jets surrendered only a fourth- and sixth-round draft pick, Tebow's presence on the roster has caused nothing but problems for the team, the front office and its fans.

The polarizing Tebow, fresh off leading the Denver Broncos to a stunning playoff appearance that included an overtime playoff victory over the Pittsburgh Steelers, is the most talked about backup in NFL -- maybe in sports -- history. As soon as the trade was completed and announced, questions began to be asked by the media and fans alike. Was Tebow going to challenge Mark Sanchez for the starting job? Did Jets owner Woody Johnson bring Tebow in purely for a public relations boost, especially in light of the New York Giants Super Bowl victory? If Tebow does not start, what will his role be on offense?

Eight weeks into the season, some of those questions have been answered and some may never be. Sanchez was anointed the starter by head coach Rex Ryan early in the offseason, and despite his and the team's struggles offensively, Ryan reiterated that Sanchez gives the Jets their best chance to win.

Sanchez is having a bad season, there is no way to argue that. He has thrown for 1,736 yards and 10 touchdowns, with eight interceptions. His completion percentage of 52.9 percent is the lowest of his career and his quarterback rating is a paltry 72.8. Comparatively, he completed 56.7 percent of his passes last season, accounted for 32 TDS (26 passing, six rushing) and had a career-high 78.2 rating.

Now it can be said that the weapons Sanchez has at his disposal this season are far worse than last year, one has to assume that the giant shadow of Tebow hanging over his shoulder and the calls for Tebow from the media and the fans cannot be helping the Sanchize.

Meantime, Tebow has been a complete non-factor for the Jets, save for a couple of fake punt first downs and a missed block on the punt team that led to a Dolphins block and touchdown. He has completed two of three passes for 32 yards and carried the ball 23 times for 78 yards. On top of that, he was voted the most overrated player in the NFL in a Sports Illustrated poll of 180 NFLers -- incidentally, Sanchez was voted No. 2.

So there you have it, what I think are the best and worst trades in New York Jets' history.