In many corners of the U.S. life comes grinding to a halt on Super Bowl Sunday as billions of people stop to party, and to watch the game. Some, however, will still have to work or will otherwise find themselves in places where watching the 2012 Super Bowl meeting between the New York Giants and New England Patriots won't be possible.

SB Nation New York offers those of you who will find yourselves in that predicament a way to still tune in to the game. Here is all the radio broadcast information you will need to listen to the game.

The Giants flagship radio station -- WFAN 660 AM -- will be broadcasting the game in the Tri-State area. Bob Papa will have the call and Carl Banks will have the analysis, with Howard Cross handling sideline reporting duties.

Super Bowl XLVI will be broadcast in Spanish by Univision. Rafael Hernandez Brito will call the play-by-play, Eduardo Martell will serve as the analyst and Joaquin Duro will be the sideline reporter.

Below, from Giants.com, is a complete list of Giants radio affiliates. Outside the Tri-State area you can likely find the game on one of these stations. 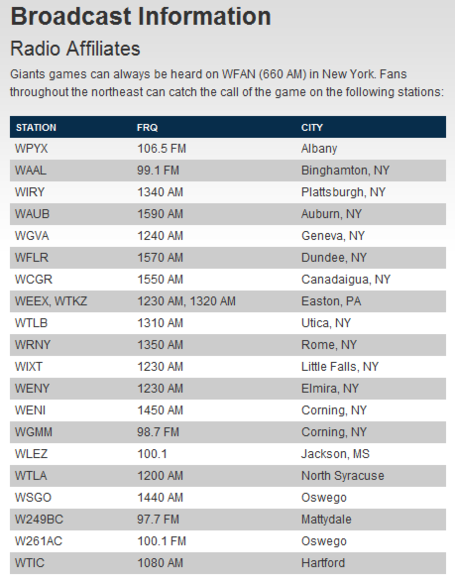