2012 Super Bowl: How The Giants And Patriots Got Here

Share All sharing options for: 2012 Super Bowl: How The Giants And Patriots Got Here

Here is a quick look at how the New York Giants and New England Patriots got to the 2012 Super Bowl.

The Giants have won five straight games, a streak that started with regular-season victories over the New York Jets and Dallas Cowboys to give New York the NFC East crown. In the playoffs the Giants have vanquished the Atlanta Falcons, defending Super Bowl champion Green Bay Packers and NFC West champion San Francisco 49ers. Below is a look at the Giants' compete 2011-2012 schedule.

The Patriots have won 10 straight games, with their last loss being the 24-20 loss to the Giants in Week 9. New England won the AFC East championship, and has defeated the Denver Broncos and Baltimore Ravens in the playoffs.

Below is a look at the entire playoff bracket. 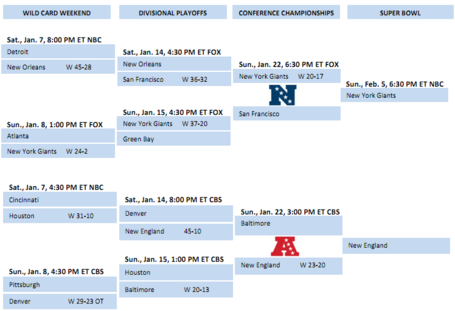