Admit it. You might not be a fan of Madonna. You are, however, curious what the often controversial 53-year-old performer will do Sunday during the Super Bowl XLVI Halftime Show at Lucas Oil Stadium in Indianapolis.

Well, the folks at the entertainment and gossip site TMZ snapped some photos recently of the stage being built for Madonna's performance. One of those photos is shown below, and several more can be found at TMZ.

Madonna told Jay Leno earlier this week that the Super Bowl performance was "the most nerve-racking thing I've ever done ... "The Super Bowl is like the Holy of Holies of America...And I have to go on in the middle of that 'Holy of Holies' and put on the greatest show that was ever put on before."

I don't know about that. Maybe all Madonna has to do is be better than the Black Eyed Peas were a year ago, which should not be difficult. Oh, and make sure there are no wardrobe malfunctions. 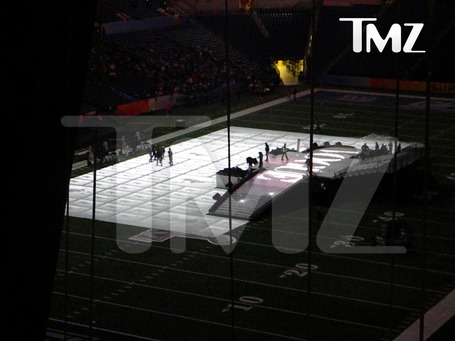