After the San Francisco 49ers kicked a field goal to tie the score at 17-17 in the fourth quarter, Sunday's NFC Championship game saw five consecutive punts between the two teams to ultimately send the game into overtime.

Neither offense could get anything going, with both teams trading 3-and-outs for four straight possessions after the 49ers field goal. Eli Manning found himself under constant pressure from the niners' front seven. He looked like this after one incomplete pass: 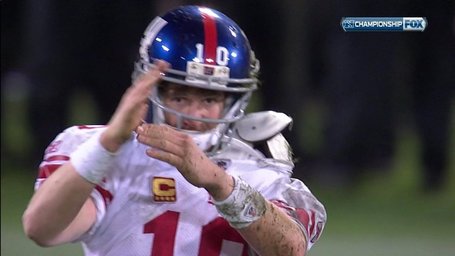 Alex Smith did not fare any better, going 2-for-6 passing and taking two sacks on the Niners' final three possessions of regulation. Victor Cruz almost made a spectacular catch to convert on third down during the Giants' final possession, but ultimately couldn't haul the pass in.

The Niners tried to one last desperation pass from about their own 40-yard but Delanie Walker's fumbled reception was recovered by the Giants as time expired.

The SB Nation New York StoryStream will have everything you need to know leading up to the Giants-49ers matchup. Check Big Blue View to join a discussion with Giants fans. For complete coverage of the NFL playoffs you can also visit the SB Nation NFL Hub Page.