The New York Giants lead the Green Bay Packers 10-3 after the first quarter of play at Lambeau Field.

The Giants started off slow on their first drive. They had two rushes go for 2 total yards and burned a timeout. Then, Eli Manning led New York into the Green Bay redzone before an incomplete pass forced a field goal. One thing the opening drive did well was to take 6:27 off the clock.

The Packers used a challenge to review a ruling that the Giants recovered a fumble on the opening kickoff. They won because as you can see, Randall Cobb's knee was down 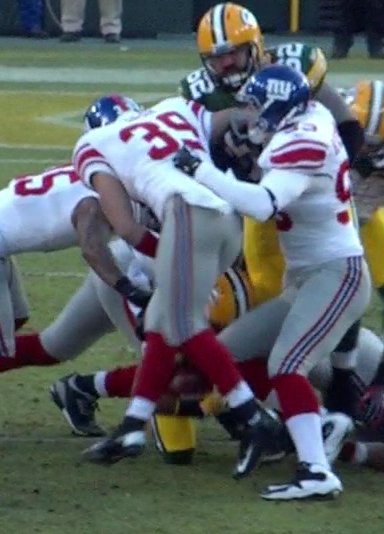 The Packers tied the game with a field goal on the drive after the non-fumble. Aaron Rodgers had Greg Jennings wide open for a big gain on third down and eight from the Giants' 29-yard line but overthrew him.

The Giants' inability to run the ball in the first quarter forced Manning to play well on third and long and he did. After saving the second drive of the game on a 3rd and 11, Manning hit Hakeem Nicks for a 66-yard touchdown on the next play. Nicks broke a poor tackle attempt in the secondary after the catch and broke away from the defense for the score.

The momentum of the touchdown was given away with a kickoff out of bounds. Rodgers and the Packers crossed the Giants' 40-yard line in a few plays but then Greg Jennings fumbled the ball away after a catch. The Giants had to challenge the ruling on the field to overturn the call that Jennings was down but failed.

After the questionable call was upheld, the Packers drove the ball into the redzone. They will be inside the New York 10-yard line when the second quarter begins.

For more coverage of Giants vs. Packers, stay tuned to our storystream. For more Giants coverage, visit our team page or our blog Big Blue View.