First, the hard-hitting San Francisco 49ers host the elegant New Orleans Saints, who rely heavily on the artistry of Drew Brees and the ability of those surrounding him in the Saints' offense to make plays. The night game features the smash-mouth Denver Broncos against the considerably less intimidating defense of the New England Patriots, a team that makes up for its inability to stop opponents consistently by using the golden arm of Tom Brady, which controls a free-flowing offense featuring All-Pro wide receiver Wes Welker and All-Pro tight end Rob Gronkowski.

Sunday brings less contrast but just as much intrigue. The day begins with the Houston Texans visiting the Baltimore Ravens, two physical teams who want to pound each other's helmets into grain, and ends with the surging New York Giants traveling to Lambeau Field for a meeting with the dominant Green Bay Packers. 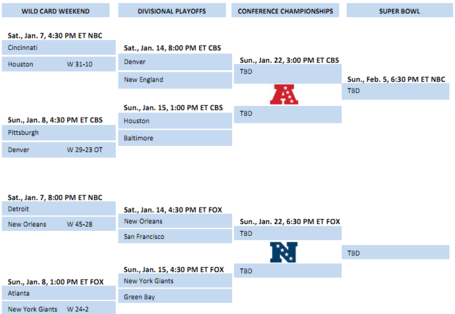