Apparently at least some NFL players consulted former New York Giants running back Tiki Barber before voting in a Sporting News poll asking which head coach they would least like to play for. Giants' coach Tom Coughlin "won" this dishonor with 22 of 111 votes, tying Miami Dolphins coach Tony Sparano.

Obviously, players who voted did not talk to former Giants star Michael Strahan. They also must have voted before seeing the jubilant locker room celebration after the Giants defeated the New England Patriots last Sunday. You can't watch that video, in which players lifted Coughlin into the air, and come away thinking this is a man they don't like playing for. 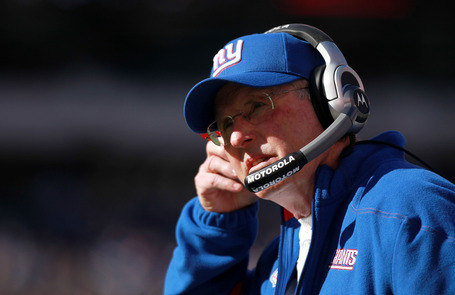 Here are what a couple of quoted players told the Sporting News.

"Coughlin is that old school, Bill Parcells, my way or the highway type. He won't bend at all. That's not the kind of coach you'd like to play for."- Bears DT Anthony Adams

"Looking at it from the outside, I don't know that any player in the league would say they'd want to play for Tom Coughlin. I wouldn't."- NFC defensive player

Coughlin, 65, is the league's oldest head coach. And yes, his methods can still sometimes require an adjustment from players coming from other organizations.

"I have no clue why he doesn't get the credit he deserves, but Coach doesn't spend time thinking about it,'' Giants defensive tackle Chris Canty said. "It's not the type of person he is and, quite frankly, it's not the type of team he wants to coach. People who know football understand just how good a football coach he is.

"There's one thing that Coach Parcells used to say all the time and Coach Coughlin reflects this in every regard -- he's the same guy every day.''