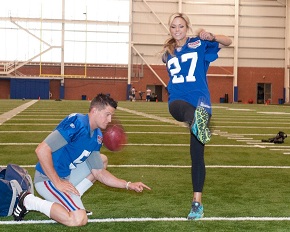 Jennie Finch tries a field goal Wednesday
at the Timex Performance Center
as Steve Weatherford of the Giants
holds. No word on whether she made it.

As former Giant Amani Toomer did a year ago, Finch has partnered with Team Timex to run the ING New York City Marathon to support the New York Road Runner's Youth Program. Toomer ran the event in 4:13.45, raising $25,817. Finch's goal is to better that. "I am going for around four (hours)," she said.

Finch caught passes with Giants' tight ends Jake Ballard and Bear Pascoe during her visit to the Timex. She also attempted a field goal.

As Toomer did a year ago, Finch will start last in the marathon. Timex will donate $1 to the New York Road Runner's Youth Program for each runner she has passed when she reaches the finish line. 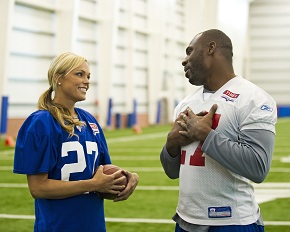 OK, so does the 27 jersey look better on Jennie Finch
or Brandon Jacobs?