VCU turned up the havoc against UMass, and St. Louis ended Butler's A-10 tournament. The two top teams in the conference will face-off for the tourney title on Sunday.

The Atlantic-10's two ranked teams will square off in the conference tournament's final, as VCU and St. Louis ran through the bracket for the right to square-off Sunday afternoon after advancing through the semifinals on Saturday.

VCU is trying to earn a conference tournament championship in their first season in the A-10, while St. Louis is trying to rattle off their 15th win in 16 games. The only matchup between the two in the regular season was a decisive 76-62 win for St. Louis, where the Billikens only turned the ball over 10 times against VCU's ballhawking defense.

Here's a look at how their match-ups on Saturday went:

6'5 Dwayne Evans ate up Andrew Smith inside, posting 24 points and 11 boards after setting a career-high 25 points Friday against Charlotte. The Bulldogs were up 24-17 but the No. 17 Billikens roared back to take the lead by the half and ended up leading by as much as 14.

The Minutemen gave Shaka Smart's squad some trouble, but the havoc got to them. VCU forced UMass into 24 turnovers, and six threes from Troy Daniels was most of what they needed on offense. The game was only one point at the half, but an ill-advised Rob Brandenberg three pushed the lead to seven points with about a minute to go and VCU held on from there.

Here's the bracket as it stands with just one game to go: 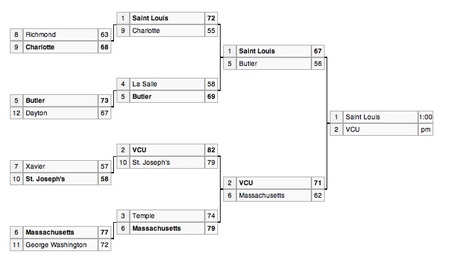 • The life and death of Earl Badu

• Full coverage of the ACC tournament