Giants Vs. Patriots: CB Bruce Johnson Out For Preseason Finale

Share All sharing options for: Giants Vs. Patriots: CB Bruce Johnson Out For Preseason Finale

The New York Giants have released its roster for Wednesday night's preseason finale against the New England Patriots, and as expected defensive ends Osi Umenyiora, Justin Tuck and Jason Pierre-Paul and linebacker Mathia Kiwanuka will not play, reports Mike Garafolo of the Star-Ledger. The only surprise was that cornerback Bruce Johnson is also out.

Here's a look at the Giants' depleted defensive depth chart (via Garafolo): 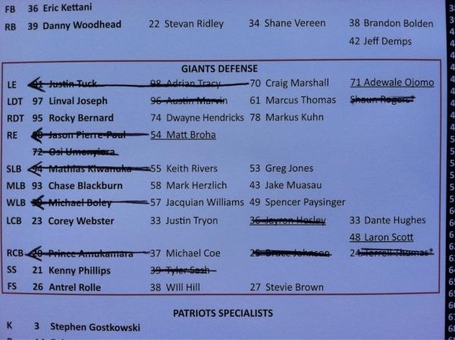 Also announced, wide receiver Hakeem Nicks will play, but that was expected as he's trying to recover from a injured foot. Earlier in the week, the 6'1, 208-pound wide out said he felt 100-percent for the contest.