Antrel Rolle showed up at New York Giants' training camp this week with a haircut that matches his bubbly, always-on personality. Rolle doesn't even know how to describe the look, which glows in the dark, saying he had "no idea" what the design was.

"I just told my barber to give me something different. This time, we wanted to go with something that glows in the dark. So this is what you got," Rolle said. [Photo after the jump]

He may not have a name for the look, but there is a method to Rolle's madness. He says each time in his career (with Arizona and New York) that he has done something like this at the beginning of training camp his team has gone to the Super Bowl.

"Whatever it takes to keep it going," Rolle said. "The first time I did it was in Arizona, and we went to the Super Bowl. I came back last year, and had a whole bunch of whatever going on my head. Hopefully, I can keep the chain going." 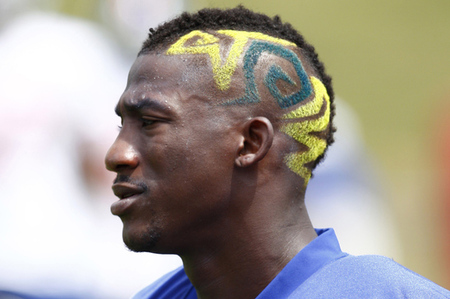