A near-capacity crowd gathered at Yankee Stadium to watch Paris Saint-Germain and Chelsea play to a 1-1 tie Sunday night as part of the 2012 World Football Challenge. Nene scored in the 31st minute, giving PSG a 1-0 lead that would last all the way until the 82nd minute, when Lucas Piazon broke loose in front of the goal and scored the equalizer to the bottom left corner of the net.

Chelsea possessed the ball 56 percent of the time, but both teams had a roughly equal number of scoring chances. PSG put the ball on goal five times, compared to three times for the Premier League club.

Guillaume Hoarau nearly gave PSG the lead late, but he couldn't finish off a Javier Pastore miss in the 88th minute. Pastore also did a brilliant job setting up Nene for the first goal of the match. He skirted through three or four defenders to earn an open shot on goal, and Nene happened to be nearby to clean up the ricochet. 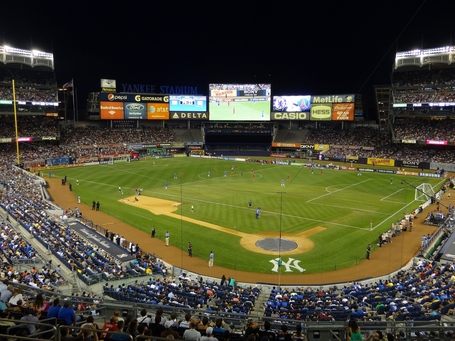 For more on the World Football Challenge and the matches being played at Yankee Stadium, stay tuned to our StoryStream.