The process of converting the Yankee Stadium baseball diamond into a soccer pitch has begun. Yankee Stadium will be the site of two matches in the ongoing 2012 World Football Challenge, the first of which will be Sunday, June 22, when European champions Chelsea will take on Ligue 1 runners-up Paris-Saint Germain at 7 p.m. ET.

A look at the beginning of the creation of the Yankee Stadium pitch is below: 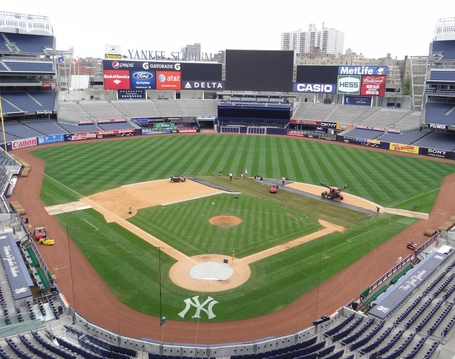 The second match at Yankee Stadium will pit Real Madrid against AC Milan on August 8.

You can see the layout of what the pitch will look like and the complete World Football Challenge schedule in our StoryStream.

This version of Yankee Stadium, opened in 2009, has hosted boxing and college football in addition to baseball. These will be the first soccer matches at the Stadium.

The Yankees will be on the West Coast for the next week for a total of seven games against the Oakland Athletics and Seattle Mariners. The first of those games is Thursday night.