Chris Weidman to Appear on Sports Extra in NY Next Sunday

Share All sharing options for: Chris Weidman to Appear on Sports Extra in NY Next Sunday 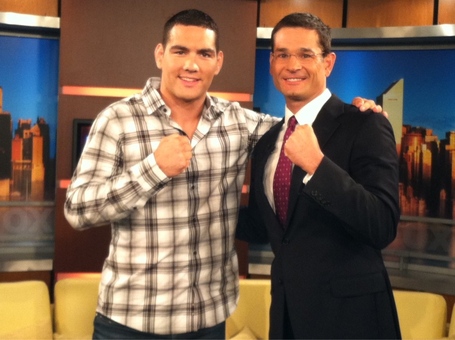 The Chris Weidman media tour continued on Sunday when he visited the studios of FOX 5 sports in New York City to tape an interview with host Duke Castiglione, which will air on WYNW Channel 5 in the New York metropolitan area next Sunday night at 10:30 p.m. (Weidman Tweeted the above photo.)

I anticipate that Weidman will discuss growing up on Long Island, his accomplishments at Hofstra University, efforts to finally get MMA legalized in New York State and, of course, his MMA career to date. I also figure he'll once again issue a challenge to UFC middleweight champion Anderson Silva. Of course, Hector Lombard will have something to say about that this Saturday night at UFC 149.