The 2012 Belmont Stakes took a huge hit when overwhelming favorite and Triple Crown hopeful, I'll Have Another, was scratched due to injury and was retired prior to the race, but the third leg of horse racing's Triple Crown certainly did not lack excitements.

The longest race of the Triple Crown races was led by Paynter for the majority of the run, but Union Rags made its push in the final stretch and eventually overtook Paynter for the lead with a couple hundred yards remaining, to win the Belmont Stakes.

Below is a picture of the photo finish: 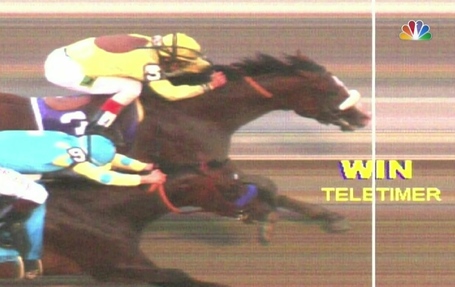 For more on the 2012 Belmont Stakes, please be sure to check out our blog And Down The Stretch They Come along with SB Nation New York for all the latest news and updates.