The 2011-12 New York Knicks are no strangers to selling apparel. Carmelo Anthony sold the fifth-most jerseys of all NBA stars and Jeremy Lin sold more than anyone but Derrick Rose. Earlier this season, Lin emerged from the Knicks bench to spawn a line of "Linsanity" gear.

Most of the Linsanity clothing was later sold at a discount when he stopped playing like a superstar, but now there's a new piece of Knicks clothing that might become all the rage:

The Amare Stoudemire fire extinguisher t-shirt can be found for purchase at Crosstown New York.

Picture after the jump. 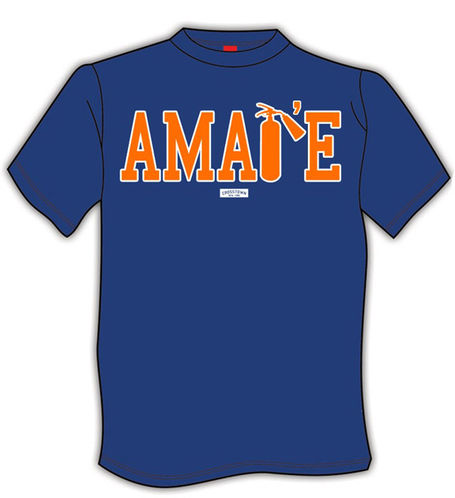 A witness to Stoudemire's injury told ESPN's Chris Broussard that "half of" the star's hand "was just hanging off" following the incident, and that people on the scene "thought he might have punctured an artery because of how much blood was coming out."

"I was like holy s--- when I hit my hand on the fire extinguisher door. I took a look at my hand I was like, what?" he said.

"I was very upset with myself. I was sad at the moment. I was feeling bad for my teammates. And out of all the times after games when you kick over ice, a chair, a cooler, you kick over a chair ... Everybody gets upset, you're so passionate for the game, everyone gets upset at times.

"But never in a million years would I think that I actually cut my hand the way I did, so, bad timing, but I'll be back."

The Knicks star will miss Game 3 against the Miami Heat and is listed as doubtful for Sunday's Game 4, but believes he will return in the latter game.

It's unclear whether he will arrive to Madison Square Garden wearing a fire extinguisher shirt, but the best guess is probably no.