The New York Giants get their 2012 Super Bowl rings Wednesday evening in a ceremony at Tiffany & Co. in Manhattan. Punter Steve Weatherford apparently could not wait to share a look at the ring, tweeting a photo of the design on Tuesday. He added "She sure is pretty."

Judge for yourself after the jump. 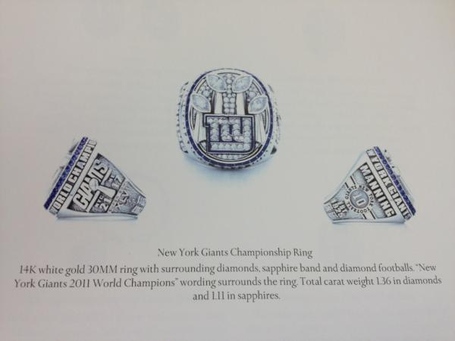 The Giants have had trouble keeping the ring design a secret. Clint Sintim, who spent the season on injured reserve, posted a photo on Twitter a few week ago. One that was quickly removed, incidentally.

The Giants, of course, defeated the New England Patriots in Super Bowl XLVI to earn the fourth Super Bowl title in franchise history and the second of the Tom Coughlin-Eli Manning era. The four titles are represented on the ring by four Lombardi trophies.

The ring ceremony is not open to the public.