Oh, for the opportunity to be a headline writer for the front or back pages of the New York City tabloids today. What, with Amare Stoudemire having sliced up his hand and shattered whatever sliver of hope the New York Knicks had in their series with the Miami Heat, today's is headline writer's paradise for the NYC tabs.

One good thing we did learn about Stoudemire. He and glass can occasionally come together as one.

The New York Post came up with "FIRE DRILLED" this morning [image after the jump.]

Let's imagine more of the possibilities:

Those are a few. And you know what? I think it's a good thing I'm not a New York City tabloid headline writer. I'm sure you guys can do better 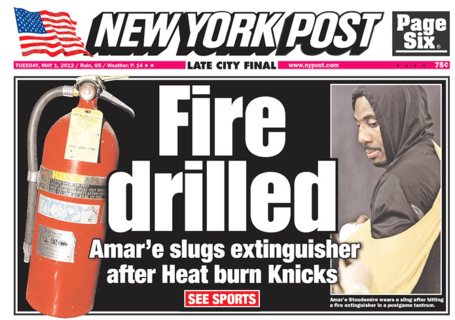