Ten Observations from the Knicks win over the Hawks on Sunday afternoon.

Share All sharing options for: Top (Duns)TEN Observations From Knicks Win Over Hawks

1.) Even though coach Mike Woodson opted to rest his star center, this game solidified Tyson Chandler's Defensive Player of the Year candidacy. With Chandler in the lineup, the Knicks have allowed 93.8 points per game and 44.8% from the field. Previously with Chandler out of the lineup, the Knicks had allowed 118.5 points per game. The Knicks allowed 112 points and the Hawks shot 54% from the field.

2.) Amare Stoudemire's defense still leaves much to be desired. He spent much of the night struggling to guard Marvin Williams (29 points) and Josh Smith (14 points). Stoudemire used the knicks final foul before the Hawks reached the bonus by reaching in when he had Williams right in front of him. On the game's final play, Williams shook Stoudemire off of him and drove down the middle of the lane to flush down a potential game-winning dunk. Even though, time ran out before Williams missed the dunk, it shined a light on Stoudemire's defensive deficiencies. Williams was able to beat Stoudemire off the dribble and in the post all night. It time hadn't expired, Williams would have been shooting two free throws because of the contact he received from Stoudemire and Anthony on his dunk attempt.

3.) Offensively, without Chandler in the lineup, Stoudemire found room to operate in the post.

4.) Here is shot chart from the Cavaliers game with Chandler in the post. 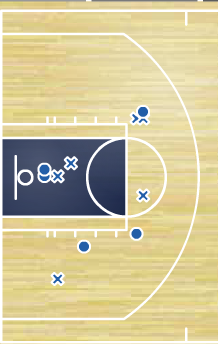 Here is his shot chart from this afternoon's contest. 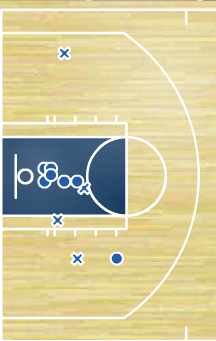 Stoudemire had the same issues with Shaquille O'Neal clogging the post in Phoenix but if Woodson can figure out how to move Chandler from the block when Stoudemire gets the ball or utilize more pick and roll(which is where Jeremy Lin excelled and the Knicks have struggled in his absence) todays performance could become the norm for Stoudemire.

5.) Even if Chandler were leading the Knicks interior defense, he could not have stopped today's three-point barrage. Both teams combined for 27 three pointers on 42 attempts. Even in crunch time, the Hawks and Knicks were shooting threes at will. After Joe Johnson drained a three that put the Hawks up 112-111, Carmelo sank a long two with his toe on the line. It was the last point that either team would score.

6.) Carmelo Anthony does not like Jeff Teague. Anthony began jawing at Teague in the third quarter while Teague was at the free throw line. On the Knicks next possession, Anthony drained a three and got in Teague's ear about it. He also sent a message to Jeff Teague with a hard foul in the fourth quarter that sent Teague flying backwards on a layup attempt.

7.) When he was finished sending a message to Jeff Teague, Anthony also came through in the clutch on Sunday again. Two weeks after his heroics saved the Knicks twice against the Chicago Bulls. This isn't a blip on the radar for Anthony either. Here are his stats from each day of the week coming into this afternoon's contest:

Note to NBA schedule makers: schedule the Knicks for more Sunday afternoon tip-offs. He seems to love and embrace the spotlight. By comparison, Amare Stoudemire is averaging just 14.3 points in four Sunday games.

8.) Baron Davis appears to be rounding into shape (no pun intended). After sitting the last two games due to illness, Davis recorded his first double double off the season. Davis scored in a variety of ways. He drove into the paint consistently, shot 2-for-3 from behind the arc.

9.) Jeff Teague may have given Carmelo Anthony extra motivation and struggled to defend a revitalized Baron Davis but he also rose for the best missed jam in the NBA this season. Who knew Teague had that type of spring though? Look's like someone's been doing plyrometrics with Josh Smith in the off-season.

10.) Despite their loss to the Cavaliers on Friday night, the Knicks are still in contention for the sixth seed and an escape from a matchup with the Bulls or Heat in the first round. If the Magic lose the their next three games and New York wins out, they should send a thank you note to Al Jefferson who sank a game-tying fade away jumper that bounced around the rim multiple times in the waning seconds of Orlando's overtime loss to the Jazz. The odds are slim. The Magic won't be favored against the Nuggets tonight or the Grizzlies in their regular season finale. The Knicks hopes may come down to the Magic's matchup against the Charlotte Bobcats on Wednesday. Unfortunately, for Knicks fans, the Bobcats may finish the regular season with the worst single season winning percentage in NBA history and are in the midst of a 19 game losing streak.

10.) Stoudemire and Anthony combined to score 61 points (22 for Stoudemire, 39 for Anthony). It's a good start but they should be combining to score at least 50 points every night. Those are the expectations. The reality has seen them struggle to score 40 combined points, which is unacceptable. With any luck, this is the new norm for the Knicks before the playoffs begin Saturday.