The New York Rangers will start their run at the Stanley Cup on Thursday, when they host the Ottawa Senators in first-round, playoff contest at Madison Square Garden. On Saturday, the Rangers polished off a stellar regular season, which featured them just losing out on the Presidents' Trophy to the Vancouver Canucks and entering the postseason as the Eastern Conference top-seeded team.

One of the big reason for New York's success this season was the play of goaltender Henrik Lundqvist, who's a Hart and Vezina Trophy candidate. Lundqvist reward? A cover photo on Sports Illustrated's NHL Playoff issue.

A picture of the SI cover after the jump... 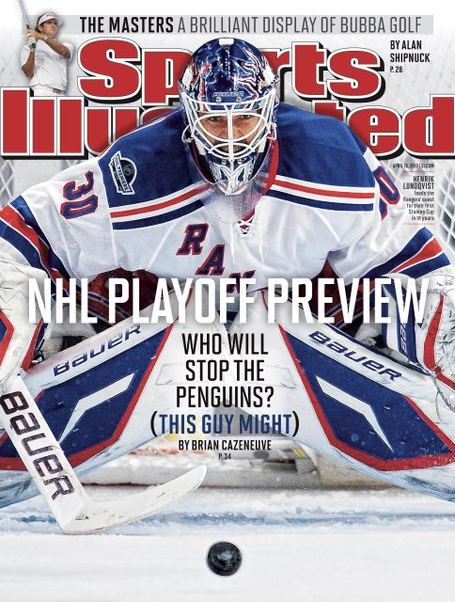 The Rangers cover is one of two different covers that SI is running this week, as Masters champion Bubba Watson, who is highlighted at the top of this cover, is on the front of other issues.

For more on Rangers hockey and the NHL playoffs, check out SB Nation Blueshirt Banter and this SB Nation New York StoryStream.