Share All sharing options for: Big East Basketball Awards 2012: Jae Crowder Earns Player of the Year; Moe Harkless Is Rookie of the Year

Harkless, whose Johnnies lost in the first round of the Big East Tournament to the Pittsburgh Panthers 73-59 despite his game-high 25 points, becomes the first St. John's player to win the award since David Russell in 1979-80. 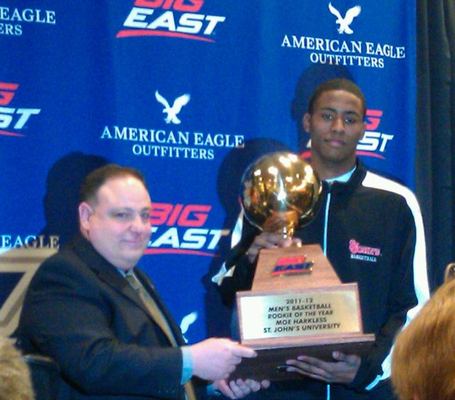 Crowder was in a two-way battle with West Virginia Mountaineers senior forward Kevin Jones, but his play down the stretch helped the Golden Eagles finish the season as the second-best team in the conference.

Heath helped lead the Bulls to their best regular season in Big East history (12-6), as well as a 19-12 record overall. So far, South Florida is on pace to earn a NCAA Tournament bid for the first time since 1992.

Here's a composite look of the 2012 Big East awards: