The start time of the 54th edition of the Daytona 500 hasn't been officially delayed, but its likely going to happen as rain has started to fall at the 2 1/2-mile tri-oval. Sunday's weather forecast at the Daytona International Speedway in Daytona, FL calls for a better percentage for rain later in the day, however, that seems not to be the current case.

Below is a picture of the radar from Weather.com. 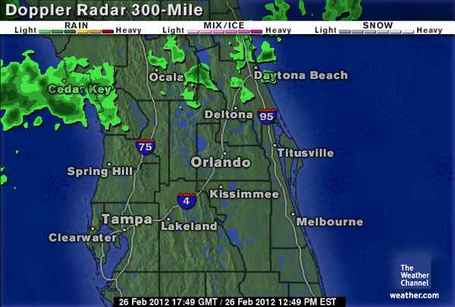 Driver introductions were scheduled at 12:40 p.m. and did happen, while fans were covered in umbrellas and went for cover.

This isn't the first time that the historic race has been bothered by weather and a delay can go on for hours because the track does have lights. So, if you're a NASCAR fan the start of the greatest race of the year might be deylaed but it probably will happen.

For more on the Daytona 500, head to SB Nation's stream. For more NASCAR, check out NASCAR Ranting & Raving.