There are Jeremy Lin jerseys, hats, and even Lin dolls. Why wouldn't there be Jeremy Lin sneakers?

Lin apparently has a new deal with Nike for his own 'Lin' shoe. From the Daily News:

"Nike has a case of Linsanity. The sportswear giant extended its contract with the Knicks' point guard, less than three weeks after his meteoric rise to fame, Beijing Business Today reported, in an effort to guard him from being stolen by rival companies." 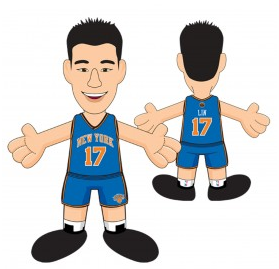 Here is a great Linsanity video which is actually a little bit old now in terms of the Lin calendar, but no less awesome because of that. 'Kudos' to The Big Lead for the find.

Linsanity meets LeBron James Thursday night when the New York Knicks meet the Miami Heat. Be sure to visit SB Nation New York for complete coverage of the game. As well as all of your Linsanity! needs, of course.