Time To Learn A New 'Lin-guage'?

Share All sharing options for: Time To Learn A New 'Lin-guage'?

Thanks to New York Knicks phenom Jeremy Lin sports fans and sports scribes everywhere are being forced to learn a whole new vocabulary. A new 'Lin-guage,' if you will.

You won't find this new 'Lin-guage' in Webster's. So, SB Nation New York is here to help you learn the lexicon. We now use made up words like:

Linsanity -- The hysteria surrounding the amazing rise to stardom of this skinny, unknown, Asian-born point guard who was cut by two teams and nearly released by the team he is now rescuing.

Linning -- What the Knicks are doing with Lin in their lineup. Six games, six victories. The Knickerbockers are on a 'Linning Streak.';

Lin-credible -- Because 'incredible' just isn't enough to describe what the former Harvard star has done the past two weeks.

Lin-tastic -- Because when he hits game-winning three-pointers to keep the Knicks' winning streak alive and further the legend of 'Linsanity,' that makes the NBA 'Lintastic.'

Lin-destructible -- This one came from The Huffington Post. Since Lin burst upon the scene the Knicks have won six traight games, even winning Tuesday night when it looked like they were beaten. Thus, they are 'Lin-destructible.'

Here are a few we haven't seen yet, but that we would like to suggest.

Lin-comparable -- Nothing like this has ever happened before in the NBA. So, that make it 'Lin-comparable' in league history.

Lin-comprehensible -- No one would have believed you if you tried to tell them three weeks ago that Lin could do this.

Lin-credulous -- Columnist Jason Whitlock and boxer Floyd Mayweather Jr. are 'Lin-credulous' over what the Knicks' sensation has done. They can't believe it, or accept it.

Lin-fallible -- The Linsanity has not been stopped. Until it is, that makes it 'Lin-fallible.'

Lin-fatuation -- That is what Knicks' fans and the media have with the young man.

There are probably many, many more we could add to the list. Dig out your old Webster's dictionary (you know, the real one and not the online version), scan through the 'in' words and add your own. You might even expand your 'Lin-tellect.' 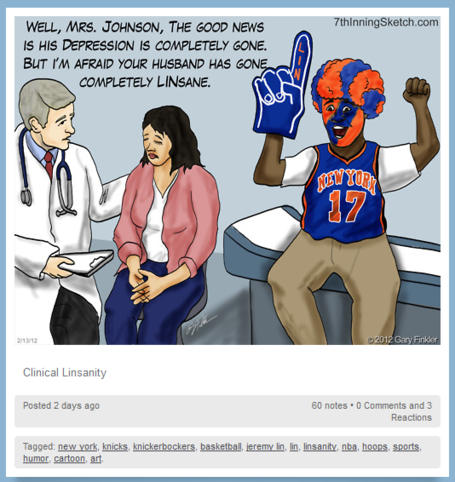