Battle of New York: Knicks, Nets bloggers duke it out

The New York Knicks and Brooklyn Nets have been battling for the attention of the media and cash of the fans ever since it was announced a second team would be moving to the city that never sleeps. Now after all the billboards and boasting, the two teams will finally have a chance to own NYC with their play on the court.

So before the Knicks and Nets kick off the 2012-13 season, SB Nation New York's Ryan Jones and Chris Celletti go at it to try and decide which team will come out on top after their first season together in New York.

Chris Celletti: Am I just being a biased Knicks supporter by thinking that the Nets are being overrated, admittedly understandably so, because of the move to Brooklyn, the new shiny arena and uniforms, etc.? 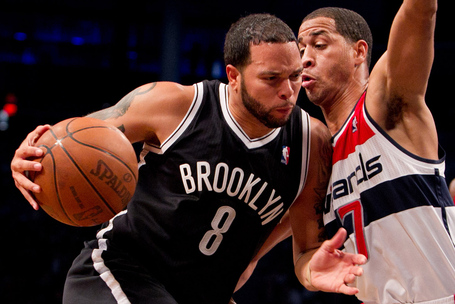 Ryan Jones: The short answer is yes. The longer answer is a bit more complicated. I think part of the reason some Knicks fans -- and others around the NBA -- think the team is overrated is because of the media's focus on the arena, uniforms and sold out concerts instead of the talent on the court. The 2011-12 New Jersey Nets weren't a quarter of the team this year's Brooklyn Nets team has a chance to be.

Last season it was Deron Williams, Kris Humphries and then pray. Now Brooklyn will have at least six guys capable of carrying the offense on a given night.

Look past all the hoopla and the Nets are a team built to win right now. They aren't the Miami Heat, but that can be said about every other team in the East.

As much as the Nets seem to overrated by man, do you think the Knicks are underrated?

CC: Maybe this is a bit of a cop out answer, but I think the Knicks are actually fairly rated by most. Of course there are some people out there who think the team isn't any good, but any unbiased, knowledgeable NBA fan knows the Knicks are a playoff team. If they're not, it should go down as an unmitigated disaster.

Am I right in my opinion on the Nets defensive frontcourt? If its not the worst in the league, is it still the Nets' biggest weakness?

RJ: Defending the paint will absolutely be a huge challenge for Avery Johnson's squad. But in today's NBA I think you can get away with hiding guys like Brook Lopez and Kris Humphries when you have Deron Williams, Joe Johnson and Gerald Wallace all able to defend on the perimeter. If there were a bunch of "ole" guys in the backcourt that always needed help I would be more worried.

Plus, for all the talk about Johnson preaching defense, this team is built to score. Williams, Johnson and Lopez are all 20 ppg. guys that have had offenses built around them. The ability to find a different guy to carry the load every night is a huge plus for this team, especially as they build chemistry.

Contrast that with the Knicks and, especially with Amar'e Stoudemire's latest injury, it seems like it will be Melo-or-bust every night. Is there anyone you feel comfortable carrying the offense when Anthony struggles? 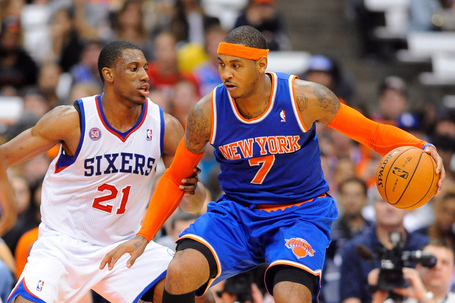 CC: Moreso than the fact that Carmelo Anthony and Amar'e Stoudemire "can't play together", I think the Melo-or-bust aspect that you mention is the biggest reason why Stoudemire should come off the bench - when he's healthy of course. The Knicks are a bit one dimensional on offense, and there will be times when Anthony shoots 30 times because he actually has to. Outside of Melo, the Knicks' best, most consistent scorer is probably J.R. Smith. That's not good. However, I think the Knicks' additions in the back court this offseason will help alleviate some of the scoring pressure off of Melo.

I'm especially encouraged by the addition of Jason Kidd. Look, we all know Kidd is up there in age, which is putting it nicely. But he's still one of the most intelligent players in the league. Kidd is going to set his teammates up for easy baskets, whether it be Anthony, Smith, Steve Novak, Stoudemire when healthy, Marcus Camby when healthy or Tyson Chandler. Also, Raymond Felton gives the Knicks another professional point guard, someone who also should get others involved as long as he stays away from the buffet line.

Let's say Stoudemire is back to 100 percent when he comes back from injury (and we're not saying back to the 2010-11 Stoudemire, but whatever 100 percent of him is at this point in his career). He should come off the bench. Firstly, it helps deepen the bench - a second unit with Stoudemire, Kidd/Felton, Smith, and Novak can score at a pretty high clip. Stoudemire and Felton had tons of success in 2010-11 with the Knicks, why not recreate that as much as possible when Melo needs a blow? At the end of games, Stoudemire and Anthony should play together, since you should always have your best five on the floor late in close games. But at that point, the offense will and should run through Melo, anyway.

What worries me a little bit about the Knicks is Mike Woodson. I just don't know that he's a true top-level coach. The NBA is a players league, a star's league, and the Knicks did go an impressive 18-6 under Woodson at the end of last year. I like him for this franchise and this city 10 times more than Mike D'Antoni. I do believe with the right coach (maybe someone who has ties to the Knicks and has won 11 TITLES AS A COACH AND IS CURRENTLY DOING NOTHING), the Knicks would win the Atlantic Division. I just worry that Woodson might be the fourth-best coach in the Atlantic, and probably the 7th or 8th best in the East, and that could hold the Knicks back a bit from their potential. Plus, Woodson's playoff record is horrific.

All that's left to do is answer the question we are ultimately here to answer: Who will have a better season, the Knicks or the Nets, and why?

RJ: I think the Knicks and Nets will be neck-and-neck for most of the season, but I see a younger Brooklyn team pulling ahead.

Very simply, this is the best team Deron Williams has ever played on, meaning he can go back to being a facilitator with the ability to score instead of a guy that had to move off the ball for the New Jersey Nets just so Avery Johnson had someone to run plays for on offense. The ability for this team to win without their star being a one-man show is a huge, and the key area where the Nets are better off than the Knicks.

Also, for the complete lack of depth in the post, I love the Nets bench as a whole.

C.J. Watson was never and will never be Kidd, but he's a tough-nosed player that isn't afraid to score when he's asked to, putting up five 20 point games last season for a stacked Chicago Bulls team. Johnson can also find instant offense off the bench with second-year guard MarShon Brooks, who has struggled in the preseason, but showed glimpses of brilliance as a rookie.

The Nets also were able to add one of the best players in Europe last season, Mirza Teletovic. Once he gets comfortable with the NBA three-point line and starts moving onto his full arsenal, watch out.

I think the Nets end up near 50 wins, good for second in the Atlantic and fourth in the Eastern Conference. That could set up a very juicy 4/5 first-round with the Knicks.

Who do you see coming out on top in year one of the "Battle For New York"?

CC: I'm a Knicks fan, so I'm assuredly biased, but I also always try to be as fair as possible. I think the Knicks are the better team because they'll be better defensively. Maybe I'm just being a hater, it's possible, but I just cannot get over the Nets' starting front court from a defensive standpoint. In contrast, it's somewhere the Knicks have become very good - provided the health of Chandler, Camby, Rasheed Wallace and Kurt Thomas.

You mentioned the Nets being a younger team, and they certainly are, but I'm glad you mentioned that because it gives me the opportunity to address the Knicks' age issue. "AARP KNICKS HAHA" has become an easy joke with the team's offseason moves, but it would hold a lot more weight if the Knicks were planning on starting Kidd, Camby, Wallace and Thomas. These guys are role/bench players who aren't expected to play a ton of minutes. You know why Rasheed Wallace and Kurt Thomas are on the Knicks? They're there to put Rajon Rondo, Dwyane Wade, Deron Williams and the rest of the East's guards into the 9th row when they drive the lane. In all seriousness, these guys are there to defend, rebound and use their fouls. Last season, when Tyson Chandler had to sit, the Knicks were a disaster defending their own paint. As long as the backup front court guys are healthy, that won't be an issue this year.

Certainly with age questions there are health questions. The Knicks certainly are playing with fire depending on older guys who are more likely to get injured. But the bulk of their starting lineup is intact, and make no mistake about it, this is Carmelo Anthony's team. I'm an Anthony defender but I believe I view him fairly. I defend him as a guy you can win with, a lot of people don't think that is the case. Anthony can get you a bucket when you absolutely need it probably more so than anyone in the NBA. That's a huge asset for a good team, for a team that figures to be in the playoffs. Anthony needs other talent around him for sure - everyone does (I'm not in any way comparing Melo to LeBron James, but even LeBron needed other people around him to win a title) - but that isn't to say that this Knicks team is built to win a title around Anthony. They're certainly short of that.

I really don't like the Nets' bench. Teletovic has a chance to be good and contribute, but then so does Pablo Prigioni for the Knicks. At some point the Knicks will get Iman Shumpert back, which will make them even deeper than they already are. When I look at the rest of the Nets' bench, I really do like the addition of C.J. Watson, but outside of him I just don't really see where any points are coming from. I see a precipitous drop off in the scoring ability from Brooklyn's starters to their bench.

It looks like we both think the Knicks and Nets are going to be around 50-win teams. I think the Knicks edge out the Nets by a few games, say the Knicks at 50 wins and the Nets at 47 or so, because I give them the edge defensively and regarding depth. I would love to see the teams battle in the 4/5 series as you alluded to. The atmosphere surrounding that would be incredible, and probably unlike anything the NBA has seen in years - since Knicks-Heat, Knicks-Pacers, Knicks-Bulls (I guess there are other rivalries I missed along the way? Whoops!).