Player of the Year: R.A. Dickey best of 2012 in New York baseball

Share All sharing options for: Player of the Year: R.A. Dickey best of 2012 in New York baseball

In the end, we chose Dickey, who won 20 games for the first time in his career at age 37 and will most likely win the National League Cy Young Award, as the best player in New York baseball for the 2012 season

All things considered, Derek Jeter's season was a phenomenal thing. But I will note, in passing, that he didn't score 100 runs and that he's enjoyed many seasons better than this one.

On the other hand, Dickey is a pretty good bet for the Cy Young Award, was one of the few season-long bright spots for a downtrodden franchise, and essentially established a new standard for knuckleball pitchers.

Both seasons were historic, in their different senses. But Dickey's has the virtue of being slightly more valuable, purely in terms of wins and losses.

Here is what SB Nation New York's Ryan Jones wrote about the season Dickey had:

There's no question who the best New York Mets player was in 2012. In a season that found this franchise taste a little success, but mostly failure, it was Dickey that never wavered and gave his team a chance to win nearly every time he took the ball. 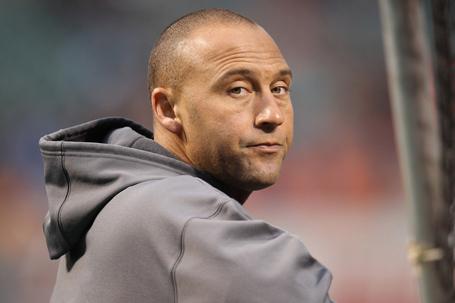 4. David Wright - He was average in the second half, but Wright carried the Mets early as a legitimate MVP candidate. He finished the season hitting .306, with 21 homers, 93 RBI and an OPS of .883 Along with the emergence of Dickey, Wright turned the Mets into surprise playoff contenders right up to their second half collapse. The talk surrounding the third baseman now will be if he will get to spend the rest of his career in Queens or walk via free agency after next season. -- Ryan Jones

5. Rafael Soriano, Yankees -- There was huge concern about how the Yankees would close games after Mariano Rivera crumpled on a Kansas City warning track with a devastating knee injury. Soriano soothed that concern with a brilliant season, saving 42 games in 46 opportunities. He made the ninth inning what it has been for the Yankees since Rivera began closing in 1997 -- a virtual lock. The Yankees don't make the playoffs without him.

6. Curtis Granderson, Yankees -- The Grandy Man is a classic example of what is becoming more and prevalent in baseball, and the type of team the Yankees are. He is an all-or-nothing hitter. He hit 43 home runs, his second straight 40+ home run season and drove in 106 runs. He only batted .232, however, and whiffed 195 times. These days those numbers seem not to matter.

7. Nick Swisher, Yankees -- Swisher can be a free agent this winter, and he earned himself a big paycheck with a terrific season. He batted .272, hit 24 home runs and had the secon-highest RBI total of his career with 93.

8. CC Sabathia, Yankees -- Two stints on the disabled list for the big left-hander, but he is still undoubtedly the Yankees' best starting pitcher. He went 15-6 with a 3.38 ERA and a WHIP of 1.14.

9. Hiroki Kuroda, Yankees -- In his first season in the American League the veteran right-hander went 16-11 with a 3.32 ERA in 33 starts. He gave the Yankees what they needed, a solid pitcher who took the ball every five days and gave them a chance to win every time.

10. Johan Santana - Maybe it was the non-stop rehab program that had him throwing since December or the overuse once the season started, but Santana hit a wall in the second half. Before being shut down with (officially) a back injury, Santana put together the worst season of his career (6-9. 4.85 ERA) since his second in the league when he was still working primarily out of the bullpen. But for Santana he lands on this list for one night of work that will forever be remembered by Mets fans. It was June 1 at Citi Field when Santana made franchise history with the Mets first-ever no-hitter in an 8-0 victory over the St. Louis Cardinals. -- Ryan Jones

Matt Harvey, Mets - Citi Field was a hopeless place for most of the second half. Other than nights Dickey was starting, there wasn't much for Mets fans to look forward to considering their team was all but eliminated from the playoffs in July. Once Harvey was called up there was another reason to watch a flailing team and shined some light on the future of the franchise. In 10 starts, Harvey was 3-5 with an amazing 2.73 ERA and 1.15 WHIP while striking out 70 in just 59.1 innings. -- Ryan Jones

Ruben Tejada, Mets - All the Mets asked Tejada to do was replace an electric fan-favorite fresh off a batting title. No big deal. Well, the way he handled himself, it certainly didn't seem like the shortstop felt the pressure. When he was healthy, the 22-year-old more than held his own both at the plate and in the field. The shortstop will benefit greatly if the Mets can put together players around him in the order that make the lineup resemble something close to major league caliber. -- Ryan Jones

Yankees' bench -- The Yankees are an old team and their starting nine simply doesn't stay healthy all the time. Shoot even their bench is old. But, guys like Eric Chavez, Raul Ibanez, Jayson Nix and Chris Stewart were critical parts of the Yankees' success. You could even include retread relievers like Clay Rapada, Cody Eppley and Derek Lowe on this list.