Syracuse Basketball New Uniforms: Grey Is The Color Of Choice

Share All sharing options for: Syracuse Basketball New Uniforms: Grey Is The Color Of Choice

Syracuse University partnered with Nike and did the unthinkable Wednesday, announcing new Syracuse basketball uniforms that involved the color grey. The release of the new "Nike Hyper Elite Platinum" uniform, which will be worn by the No. 3-ranked Orange during their home game, Feb. 22nd, against the South Florida Bulls, is expected to get some resistance from fans because the jersey's color is the primary shade of long-time Big East rival the Georgetown Hoyas.

After the jump, a picture of Syracuse basketball's new jersey... 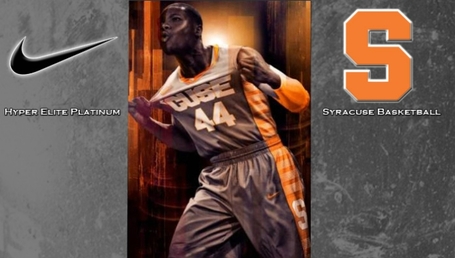 via suathletics.syr.edu courtesy of NIke.

Over at the SB Nation's Troy Nunes Is An Absolute Magician the creator, Sean Keeley, is in New York City and seeing the jersey in person (more pictures) and he doesn't think they look that bad.

"Gotta say, in person, they look a whole lot better than you'd think at first," tweeted Keeley. "The orange pops like crazy."

If you're curious how long SU will wear the grey uniforms?

"Word is Syracuse will wear this unis against South Florida and that's it," Keeley tweeted. "One time only."