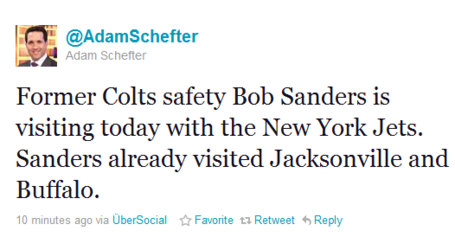 Bob Sanders to the New York Jets? Is this a good idea or a really bad one, Jets fans?

The Jets were not satisfied with their safety play in 2010, especially after Jim Leonhard suffered a season-ending injury, and the former Indianapolis Colts star is a two-time first-team All-Pro.

The problem with Sanders, 30, is that he has rarely been able to get on the field in the past three seasons. He played just nine games for the Colts in the past three seasons combined, just one in 2010. In seven NFL seasons, Sanders has played more than six games only twice. Granted, in each full season he played he was a first-team All-Pro, but counting on him -- and signing him to any type of expensive contract -- would seem to be a huge risk.

Sanders seems more like the type of player a team might bring in late in pre-season or during the season on a low-risk type deal. Not a guy teams would engage in an offseason bidding war for, especially an off-season as uncertain as this one promises to be.