Morning Coffee! An Up And Down Monday

Share All sharing options for: Morning Coffee! An Up And Down Monday 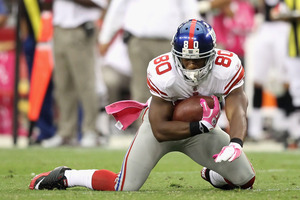 Did Victor Cruz of the New York Giants give himself
up on this crucial fourth-quarter play?
(Photo by Christian Petersen/Getty Images)

Good morning, New York sports fans! As always on a Monday in the fall, though, I know whether today is a good one or a bad one depends largely on which teams or teams you root for.

Giants 31, Cardinals 27: Giants Rally With 21 Fourth-Quarter Points: If you are are New York Giants fan today is a great day. The Giants earned a come-from-behind victory over the Arizona Cardinals with an assist from a controversial call in the closing minutes. The Dallas Cowboys and Philadelphia Eagles imploded, and the Giants are tied for the top spot in the NFC East with a 3-1 record.

Ravens 34, Jets 17: Sanchez Grounded as Jets Fall In Sloppy Game: If you are a New York Jets fan today is a miserable day. The Jets' offense could not have been more pathetic Sunday night in a loss to the Baltimore Ravens. The porous New York offensive line turned quarterback Mark Sanchez into a human tackling dummy, and only the nearly-as-bad Baltimore offense gave the Jets any hope in the game. The reeling Jets now have to get ready to face the New England Patriots.