Small guys who came up big in the New York baseball scene.

Share All sharing options for: My Favorite Little People

New York is known for all things big: The Empire State Building, Donald Trump's ego, Babe Ruth's stomach. Even the shortstops aren't short anymore (Derek Jeter is 6-foot-3 and Jose Reyes is 6-foot-1), so with all the attention lately going to basketball players who stand about 6-foot-8 or so and may or may not be coming to NYC, let's shine a spotlight on some of our favorite diminutive New York players -- and the Gotham baseball scene has witnessed its fair share of quality little guys. They're not Oompa-Loompas or Munchkins, but they are under 6 feet tall. They may be short in stature, but they played their way into out hearts. Here's a list of some favorites (warning: they are not listed in any particular order, not even by size).

Wally Backman: The hustling second baseman epitomized what the 1986 Mets were all about. They were dirty, tough and mean, and Backman led the way. His mustache alone was tougher than most of the National Leaguers in those days. He now manages the Brooklyn Cyclones. His tirades are legendary, and he sure would be entertaining if he ever gets a chance to manage the Mets.

Mickey Rivers: Mick the Quick roamed center field and batted leadoff for two Yankees world championships. He also walked to the plate like he was 81 years old and his feet were killing him from playing shuffleboard all day down in Del Boca Vista.

Bud Harrelson: He won a Gold Glove, was an All-Star and helped the Miracle Mets win the World Series. The skinny shortstop played 13 years for the Mets and hit only one career home run at Shea Stadium. Those were the days.

Andy Stankiewicz: Who tried harder than this former Yankee infielder? His career might not have lasted long but our memories of him did. Jeter may have won more championships and is going to the Hall of Fame, but "Andy Stankiewicz" is just more damn fun to say than "Derek Jeter."

Endy Chavez: The only player on this list who is six feet tall. He seems shorter, though, doesn't he? And he plays like a little guy. He was a key contributor to the 2006 Mets division title and, of course, made one of the greatest catches in Mets history, and he was so popular that year that if it were two decades earlier, Michael Jackson might have carried him to the American Music Awards in the '80s instead of Emmanuel Lewis.

Melvin Mora: He was the original Endy. He played for the Mets for only parts of two seasons, but scored the winning run on a wild pitch in the last game of the 1999 season to set up the one-game playoff against the Reds, and then batted .429 in the NLCS against Atlanta. The next year the Mets needed a shortstop after Rey Ordonez broke his leg sticking his foot in his mouth, and traded Mora for Mike Bordick. In 2001, Mora's wife gave birth to quintuplets. They named them Groucho, Chico, Harpo, Zeppo and Gummo (ok, not really, that's just what I would have named them). 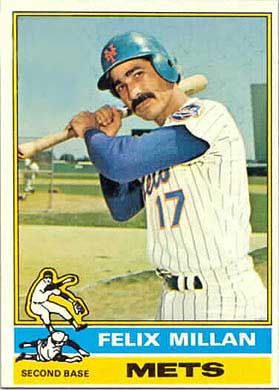 Felix Millan: Felix the Cat played for the Mets from 1973-'77. He's best remembered for choking up about 10 inches on his bat. He was the consummate number-two hitter, a great fielder and helped the Mets win the NL pennant in 1973. Unfortunately, he was body-slammed by Ed Ott after he punched the Pirates catcher in the face while holding a baseball in his fist, which basically ended his career.

Bucky Dent: The 5-9 shortstop hit the famous home run in the one-game playoff in Boston in 1978 and also was the World Series MVP that year. But we'll always remember him for playing Jane Seymour's love interest in the made-for-TV movie The Dallas Cowboys Cheerleaders.

Whitey Ford: The 5-10 Astoria native won 236 games for the Yankees, a Cy Young award, a World Series MVP and is a member of the Hall of Fame. But none of his accomplishments compares to his appearance on an episode of The Simpsons, when he was hit with a barrage of pretzels so Homer renames the snack food Whitey Whackers.

Joe McEwing: Super Joe made himself useful by being able to play just about every position. Did he play any of them particularly well? Not really. But he turned himself into a fan favorite by always hustling and being a nice guy. He was so versatile he sometimes sold cotton candy in the stands between innings.

Horace Clarke: The second baseman played on the Yankees for 10 years (1965-'74), and those years were actually named after him -- The Horace Clarke Era. Take that, Willie Randolph.

Willie Randolph: Speaking of Willie Randolph, here he is. He was a two-time world champion and a five-time All-Star. But more importantly, I met him while attending the Ron Blomberg Baseball Camp as a child, and he was as nice and down to earth as could be.

Pee Wee Reese: You can't have this list and not have someone named Pee Wee on it. The 10-time All-Star and Hall of Famer didn't get his nickname from his size, though. As a kid, he was a champion marbles player, and the smaller marbles were called Pee Wees.

Lenny Dykstra: He was little when he was on the Mets before suspiciously gaining about 50 pounds when he moved on to Philadelphia. He hit a walk-off home run in game three of the 1986 playoffs, was one of the Wild Boys with Backman and always had a mouthful of tobacco. He was the original Dude -- sorry, Jeff Bridges. (I'm only counting his Mets years here, not his bulked-up time with the Phillies or his failed "stock guru" era.)

Billy Martin: The former Yankees player and manager may have been little, but he made up for it with his fists, his belligerence and his drinking problem. He was a genius as a manager, though, leading four different teams to division titles. And he was even a top-notch actor, playing himself in One in a Million: The Ron Leflore Story.

For in-depth discussion on the Yankees, go to SB Nation's Pinstripe Alley, and for Mets news, analysis and, yes, even poetry, check out Amazin' Avenue.