Bay And Granderson Are Disappointments (So Far)

A look at the performance of two key players acquired by New York teams during the offseason.

Share All sharing options for: Bay And Granderson Are Disappointments (So Far)

Jason Bay and Curtis Granderson were the New York Mets' and New York Yankees' big offseason acquisitions, respectively, brought in to fill out the two teams' outfields. And both, so far, would have to be labeled disappointments. Bay is the $66 million man, but so far he's not coming close to being worth that. And Granderson was supposed to be the sure thing that Austin Jackson could only hope to become.

The Mets left fielder's fielding has been better than advertised. His base-running is better than expected (except when he was picked off first the other day). His average is only a little lower than where it should be. But, where's the power? Where are the home runs? Where's the slugging? Where's the run production? The Mets' offense has been inconsistent and often struggles to put runs across the plate. Now that Rod Barajas has come down to earth and become the real Rod Barajas again, and with Jeff Francoeur Frenchifying the lineup by never getting on base, an on-again, off-again Jose Reyes and no Carlos Beltran the first half of the season, Bay's shortcomings are really hampering the team this season (of course if Mike Pelfrey and Hisanori Takahashi continue their descent into Oliver Perez land, all the hitting in the world won't help). He's only 31 years old and has handled pressure situations before up in Boston, so his lack of power has been a real surprise. Sure, Citi Field was supposed to cut down his home run totals, but not by this much. And he's not exactly slamming any long balls on the road, either. He's well below his career average/OBP/slugging (.278/.374/.510), at .264/.355/.414. And he wasn't exactly in a downward trend heading into his debut season with the Mets. His OPS the last few years has gone up (with the exception of a subpar '07): 2006: .928; 2007: .746; 2008 Pittsburgh: .894; 2008 Boston: .897; 2009: .921. The question now is, will he be losing playing time with the return of Beltran? Who would have thought we'd be saying that about him this year? 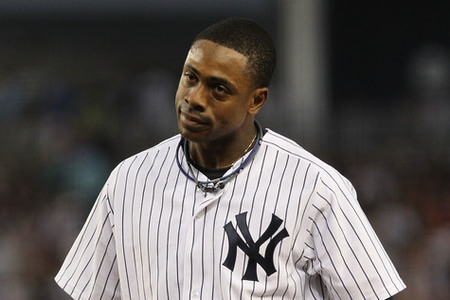 While the Mets have been killed by Bay's subpar season, the Yankees can look past Granderson's struggles, as their juggernaut keeps on rolling, with the best record in the major leagues, which is mainly due to their stellar starting pitching. But the amiable former Tiger was supposed to be in his prime, ready to step into center field at Yankee Stadium, rather than take a chance on Brett Gardner or Jackson. Gardner's the one who's surprised, though, with an outstanding season, while Granderson has surprised but in a negative "Surprise -- you owe the IRS money" type of way. Sure, he's had a few big hits, but he's battled injuries and hasn't come close to the performance the Yankees expected of him. Is it really a surprise, though? While Bay's stats indicate he's in the prime of his career, Granderson has been trending downward. He seems to have peaked in 2007. His line has descended the last four seasons (including this one): .302/.361/.552; .280/.365/.494; .249/.327/.453; .237/.307/..398; with his OPS going from a career high in '07 of .913 all the way down to his .705 mark of this year.

Both Bay and Gardner have kept up their reputations as guys with great attitudes and positives in the clubhouse. Neither seems to be overwhelmed by New York. And there don't seem to be any signs of the phantom injuries for Bay floated out there in the winter by the Red Sox and Peter Gammons, so hopefully he's just going through an acclimation period or had an off half-year. That happens. There's plenty of time for both players to pick up their game the second half of the year, and the next few seasons, too. It's still too early to label them "busts." But as we all know, and as Yogi Berra once said, "It gets late early out here."

For in-depth Mets coverage, check out SB Nation's Amazin' Avenue, and for all things Yankees go to Pinstripe Alley.